Hilti Innovation Day 2017 took place around the Dallas, Texas area with stops in Irving and Plano to see the latest tools and tour Hilti’s facilities. Although Hilti is a smaller player in the US compared to some of the other brands, they’re a global company with a presence in more than 100 countries around the world and are known for their industrial quality build.

They also have a big focus on vibration reduction with some of the best tools in the concrete industry when it comes to protecting the user from vibration. But with the September 23 deadline for OSHA silica dust compliance now behind us, we expected to get a closer look at dust control as well. While there’s plenty to talk about in that sector, Hilti also has some impressive tools coming out in other areas – including for electricians.

With concrete fresh on everyone’s mind, let’s start with dust control and the tools that go along with it. For extreme dust collection, Hilti has their 2017 Pro Tool Innovation Award-winning 300 CFM vacuum. It uses twin turbines and is well suited for heavy-duty dry cutting that creates a lot of dust.

Hilti designed a shroud to go around their breakers to collect airborne dust. My first thought was to wonder how well it can actually collect dust in this application. After all, you’re breaking concrete. But watching the process closely, you can see that dust is ejected up and captured by the shroud with surprising effectiveness while the pieces fall away. It’s intentionally designed to break away and be set back in place with your foot. As a consumable item, 4 shrouds come with the package.

Hilti has their Table 1 ready onboard dust collection out in the market. The ones we saw are specific to their 36V and 22V SDS-Plus rotary hammers to collect dust right at the concrete penetration. Table 1 compliance requires that you have a filter cleaning mechanism on the extractor which Hilti satisfies with a manual device on the base. 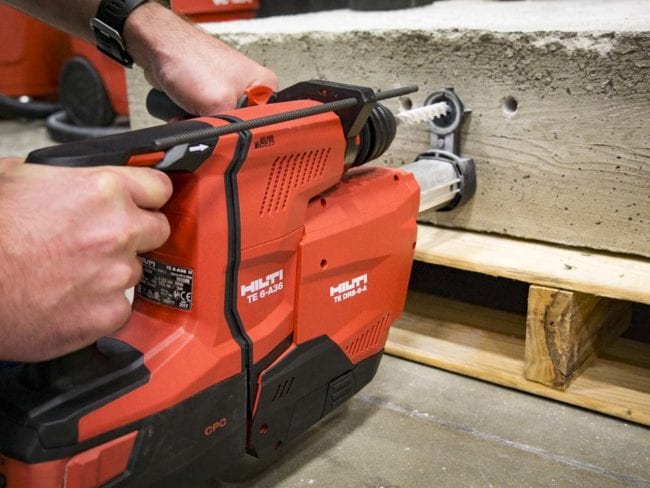 Hilti’s 2017 Pro Tool Innovation Award-winning gas saw water pump is an add-on for the DSH-700-X and DSH-900-X power cutters. It allows you to use a non-pressurized water source (like a 5-gallon bucket) to act as a water supply and eliminate the need to use a hand pump or drag tons of hose to a spigot. 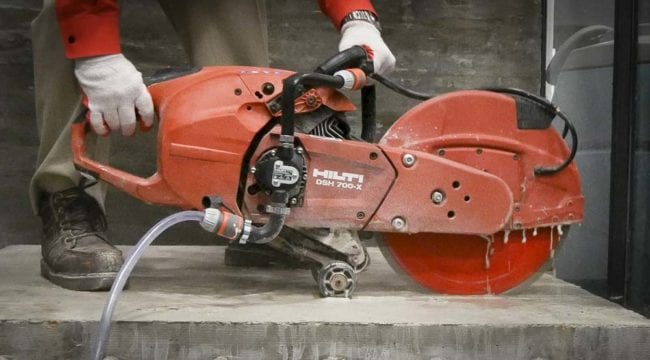 Hilti Innovation Day 2017 featured several new smart tools that will be coming out in the next year or two. One of the most impressive is their 22V impact wrench. This will get a “brain” component that attaches between the tool and battery.

Once installed, you’ll be able to scan the Hilti concrete fastener barcode you’re working with and the tool will dial in the amount of torque needed to set it correctly – not too tight and not too loose. A simple green/red indicator lets you know if everything went correctly. If not, you simply double check it with a torque wrench.

Concrete nailing isn’t an area you’d necessarily expect to find smart technology showing up, but Hilti went there. The new DX 5 uses Bluetooth connectivity to give you a report on how many fasteners have been fired and when it’s time for maintenance. For those of us that like to ensure our tools don’t fail us, we often clean them more often than necessary. Of course, some of us wait a bit too long. Either way, the reporting function will help maintain the appropriate maintenance cycle so you maximize the tool’s on-site use.

Hilti realizes nearly every tool class is at least looking at going cordless with lithium-ion power. The Hilti BX 3 takes it to concrete nailing, but not in the same way DeWalt did with their flywheel mechanism. Hilti uses a belt/spring combination that looks like it will offer much greater consistency. And just in case you’re wondering, we did ask about belt life. You can expect 50,000 shots before it needs to be replaced. Of course, the first two years of service are covered under Hilti’s 20-2-1 warranty and you’ll never have to worry about the cost of repair if you use their Fleet Services program.

NFC gives your phone the ability to act as your wallet by simply tapping it against a pay station. Hilti Connect is beginning to integrate NFC technology into their new tools as a way to easily track them. One of the coolest features is that the tool is scanned into your account when you purchase it, so all the warranty, repair, and service information is in the cloud and you don’t have to keep track of receipts. There’s even a “Request Service” button in the app to get a repair or maintenance service underway.

One the laser side of things, Hilti is bringing a new green cross line laser to the market. This one has one 360-degree horizontal and two vertical lasers to produce a pair of crossing lines if you need them. The small droid look of the laser allows it to use a Hilti 12V battery for power and feature a micro adjust dial once you have your lines close to the target. There’s also a reference point underneath so you can accurately place the laser where you need it for a perfect line.

FireStop has a couple of new additions. One is a track seal that goes over and around the track prior to installation. This fire/smoke seal eliminates the need to use sealant solutions that need time to cure. To ensure accurate installation, you’ll need to set a laser, but once the track is up, you’re done. One of the nice things is that you can piece together smaller strips to create a seal, so there’s less waste material. There’s also some inherent sound dampening that comes as a bonus.

The bigger deal is that Hilti has developed FireStop integration to work with BIM (building information management) software in the AutoDesk environment. Working with an architect and engineers, you’ll be able to plan and execute perfect FireStop installation and avoid the dreaded moment when you realize something isn’t quite right once the structure is already being built.

Hilti’s 22V and 36V grinders made an appearance and showed off their ability to eat I-Beam for breakfast. We’ll have reviews coming out on both models over the next several weeks. You’ll want to check back in when they publish since both grinders are impressive in their own right.

Metal cutting circular saws just took a turn for the better. As soon as I heard the blade hit metal on Hilti’s new 22V metal cutting circular saw, I thought it sounded like a cold cut saw and was right! The metal comes off cool enough to pick up right away and far fewer sparks are flying around. Even though you’ll need a cold cut saw blade to go with it, I love the concept and performance we see here. 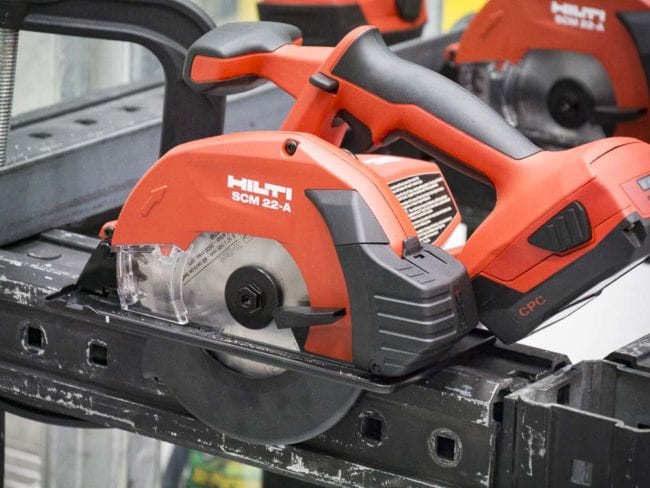 Wrapping up Hilti Innovation Day 2017, there are three electrical tools on the horizon – a cutter, crimper, and knockout all on the 22V platform. The three tools have slightly different motors for their specific jobs, but share a form factor on the housing side. Is Hilti considering a multi-head electrical tool? If they are, it’s still a secret.

Most of us are painfully aware of the labor shortage in the construction industry. For some of us, it’s also […]

Clint, How is the new Hilti 22V “cold cut metal saw” any different than ALL the other cordless metal cutting saws from Makita, Hitachi, Milwaukee, Bosch etc? They ALL use low rpm carbide tipped saw teeth engineered to cut ferrous metal without sparks or heating of the workpiece. Doesn’t matter if the saw is a mini 4 inch diameter bladed cordless for small diameter conduit or all the way up to 9 inch blade diameter (Fein 9″ handheld corded ferrous metal cutting saw) and of course there are a bunch of slow speed 14 inch bladed saws from Fein, DeWalt,… Read more »

I think this should say “twin fans”. Turbines extract energy from air/water/etc.

And...we'll even send you our "Best Tools for Your Hard-earned Dollars" white paper!
wpDiscuz
3
0
Would love your thoughts, please comment.x