Last year Craftsman released their Nextec Hammerhead Auto-Hammer which operates on a similar principal as a pneumatic palm nailer. Of course this new tool intrigued us, but there was nothing to truly compare it to – that is until now. This holiday season, Ryobi has released its version of the Auto Hammer. We decided to put it head-to-head against the Craftsman Hammerhead model… and to make things a little more interesting; we figured we would also compare both battery-operated products to a Senco pneumatic palm nailer and a plain old fashioned framing hammer.

Last year Craftsman released their Nextec Hammerhead Auto-Hammer which operates on a similar principal as a pneumatic palm nailer. Of course this new tool intrigued us, but there was nothing to truly compare it to – that is until now. This holiday season, Ryobi has released its version of the Auto Hammer. We decided to put it head-to-head against the Craftsman Hammerhead model… and to make things a little more interesting; we figured we would also compare both battery-operated products to a Senco pneumatic palm nailer and a plain old fashioned framing hammer.

The concept of the Auto Hammer and the Palm Nailer is to be able to drive nails in tight spaces where you cannot get a sufficient striking force with a regular hammer to drive the nail home. Or – you can use them to drive nails in any circumstance where you simply don’t feel like using your hammer. The big difference these nailing tools have from other types of both battery and air powered nailers is that these allow you to use bulk (individual) nails rather than the collated types (connected together). 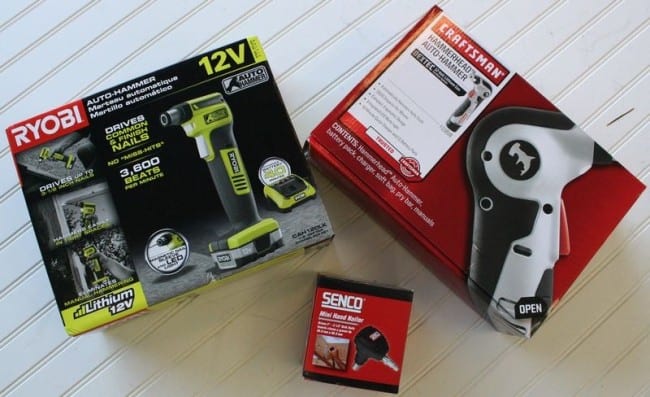 To start with, we opened the packages of each and checked the contents to make sure all the parts and pieces were accounted for. We then proceeded to fully charge the batteries for the Auto Nailers. Both of the Auto Nailers feature compact size 12V Lithium Ion Batteries and come with quick chargers. The fit and finish of both the Craftsman and the Ryobi Auto Hammers are very similar, aside from the color differences. Both have ABS plastic bodies with rubber overmolded grip areas. The Ryobi did have a larger amount of the body covered with the grip material, which might make it more comfortable when holding it in various positions. Both of the auto hammers have LED work lights and, as a safety, they are trigger activated. This means, that once you position a nail, you still need to pull the trigger to drive the nail in. With the Senco mini palm nailer, all you do is position a nail and press the tool into the head of the nail and the hammer action starts, no trigger needed. All three of the nailers have a spring loaded safety collar that surrounds the nail-driving hammer inside so that your finger never comes in contact with it. All three of the powered nailers have a magnet in the hammer sleeve to help make holding nails in the tool easier. 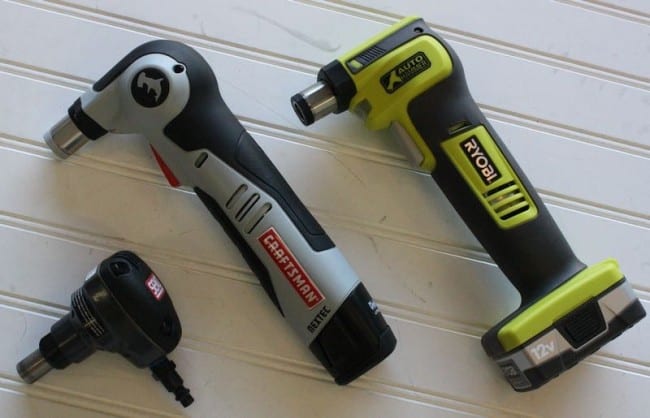 To start our testing, we used the same piece of pressure treated wood for all the nailing tools along with the same size and type of nail for each. We chose a dry piece of pressure treated 4×4 pine as our test wood that was nearly free of knots. We figured that given the types of projects these tools are advertised for, like fencing, decking, and framing, it would be a fair test piece to use. We selected five of the same type of nails for each tool and then tested the ease and speed of driving the nails flush. We also measured the noise level each tool had.

Since manufacturer packaging on all the tools claim to be able to drive 3-1/2″ 16d bright common nails, we started with those. After numerous attempts, it became ironic to us that both of the Auto Hammers did not have the power to be able to drive the nails further than an inch or so into the wood. Even with freshly charged batteries and with us using two hands (and our weight behind them) the Auto Hammers would not drive the nails home. Even more interesting was that the Senco mini palm nailer nose was not large enough to accommodate the head of the 16d common nails. So the Auto Hammers were out of the competition in the first test. Our only finisher at this level was the standard framing hammer.

Testing Note: We scrounged around and found some galvanized 16d framing nails that had some smaller heads on them and we discovered that the Senco Mini Palm Nailer was able to easily drive these nails flush in approximately 2-3 seconds.

Since not all the tools were able to equally compete in the 16d test, we next tried 3-1/4″ 12d bright common nails. All the tools were able to compete here, but we found it interesting that neither of the battery powered Auto Hammers was able to fully drive home a nail. We went further and tried driving the nails in different parts of the sample piece of wood just to make sure that we weren’t hitting a hard spot and still failed at driving the nails all the way in. We stopped the clock in all cases by 25 seconds because the noise was starting to hurt our ears and we had to put in ear plugs. The Senco Mini Palm Nailer was able to rapidly set the nails flush in about the same amount of time as it took to hand nail them. The Palm Nailer took the least amount of effort to drive the nails in.

One of the major points we noticed in our testing, aside from the inability of the Auto Hammers to drive larger sized nails, was how loud their noise output was.  We needed ear plugs, especially after having the tools in continuous operation after 25 seconds. The Palm Nailer was trailing pretty closely to the noise level of the Auto Hammers, but since it drove the nails in so rapidly, it was perceived as being much quieter. The hammer was the quietest of the tools tested. Since the concept of the Auto Hammers and the Palm Nailer is such that you can drive nails in confined spaces, we definitely suggest you always wear hearing protection since small spaces will amplify the noise level you will experience. Safety is always a primary concern of ours, so make sure to wear some good safety glasses, too whenever you are hammering nails with any kind of tool.

The more we used and tested the Auto Hammers the more they felt like toys than real tools. Between the Craftsman Hammerhead and the Ryobi Auto Hammer, we think the Craftsman was marginally better, with a slightly better feel in the hand and a little quicker nail driving action. We found the battery life of both tools to be sufficient and since they come with quick chargers, you will not be down for long unless, of course, you already have some battery that might fit them from other NEXTEC or Ryobi tools you own. If you have a real project to complete, we think that the Auto Hammers will disappoint on one level or another; whether it is the actual performance, or the amount of noise they cause. Given their inability to actually drive framing-sized fasteners, we think it will be pretty limited as to how much real building can be done with them. So, do they eliminate manual hammering like the packaging claims? We think not, even in confined spaces. For those of you that have to do something in that crawlspace or in an area that is difficult to access, we strongly suggest a Palm Nailer. For our test here, we chose a mini Palm Nailer to show just how versatile, compact and powerful they were. Given that the tested Palm Nailer was about half the size of a standard Palm Nailer, we are pretty sure you can find one that will nail any size nail you might have. And of course just for the sake of argument, you can always revert to the way it’s always been done – grab a hammer. 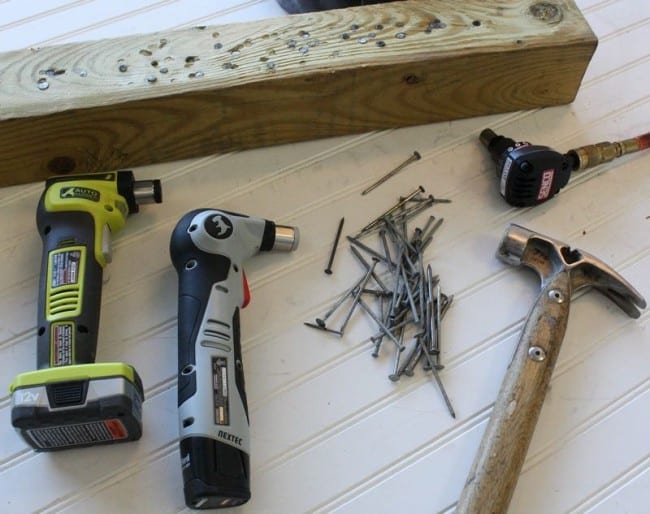 Bottom line, we believe both the Craftsman and the Ryobi Auto Hammers are overpriced gadgets that are best suited as gifts for the guy that has it all or for the fellow that only has some really light duty projects around the house. For anyone who has a compressor we suggest taking the same money you were going to spend on that gadget and getting a mini Palm Nailer. Add in a decent framing hammer and you will be even more satisfied.

We’re teaming up with CRAFTSMAN® to tell you about three new additions to the CRAFTSMAN® TRADESTACK™ storage system. An Organizer, […]

Hi Tom, Mike here. I’m so glad I found your review of the auto nailers and palm nailer. I was so close to running right out to my local amazon sight and ordering one of these products. I have a small project, confined in nature, that would be difficult with a regular framing nailer. After reading the marketing on these tools I though I had found what I needed. Your review was just what I have been looking for. Real test experience and results. Thanks for all you’re effort. Saved me time, money and most of all, frustration and disappointment.… Read more »