When Hurricane Irma decided to pay the PTR headquarters a visit, we took a good hard look at our generator situation. It wasn’t the best and since we were due for an upgrade anyway, we reached out to Ryobi to see what they have in the works. Enter stage left the new Ryobi 7000-Watt Generator. It’s more than just the wattage that makes this model worth looking at for Pro jobsites and emergency power, so let’s jump in and see if it’s right for you!

It’s pretty obvious that the Ryobi 7000-Watt Generator produces 7000 running watts. For starting, it will give you up to 8750 watts. It’s a big generator in both size and weight (209 pounds), but that’s what you expect when you leave the 5000-watt class and move up.

Connections are pretty simple – you get four 120V AC outlets and one 120V/240V 30A outlet to work with. Rubber covers help prevent moisture intrusion when they’re not in use. You’ll want to check the weather forecast if you’re going to be running the generator outside of cover since Ryobi specifically tells you not to run in the rain or snow.

It goes without saying that you never, ever run a gas generator inside. Ever. We tragically had a 7-year old die in our town following the hurricane thanks to carbon monoxide buildup from running one inside.

Electronic fuel injection controls the amount of fuel going to the engine, so there’s no carburetor to worry about cleaning. EFI helps improve gas mileage along with reducing some maintenance. According to Ryobi, you’ll save 25% on your fuel costs. Better fuel efficiency translates into longer runtime on a tank of gas, so you stay productive longer. 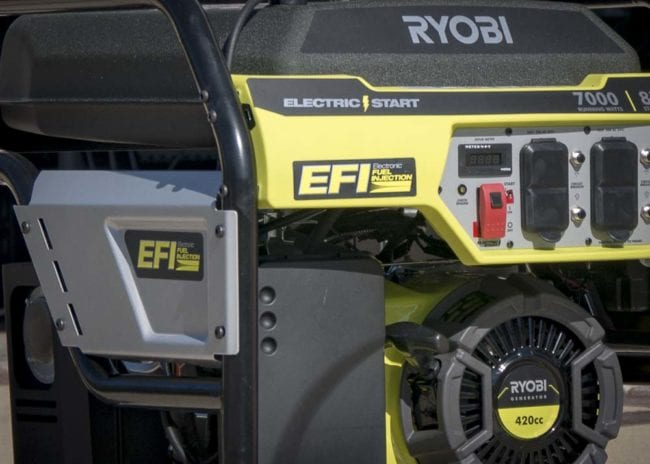 The Ryobi 7000-Watt Generator also includes an electric start. For anyone that’s worn out a shoulder before the day even gets started, that’s a welcome feature. A small lead-acid battery is preinstalled on in place. You just need to attach the positive and negative connections and charge the battery before you’re ready to get to work for the first time. 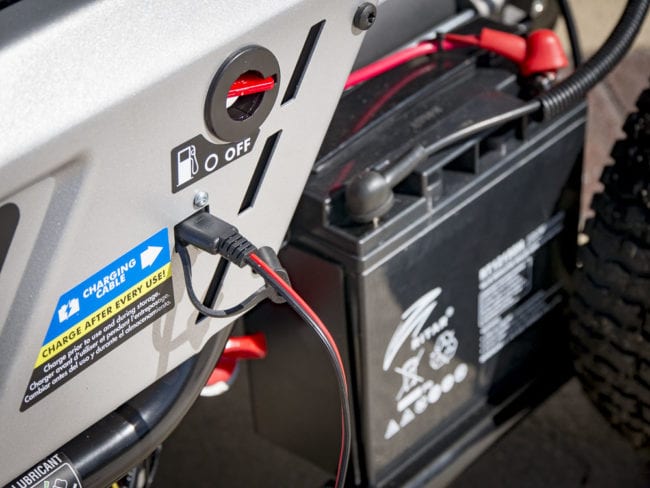 You’ll want to put the charger on at the end of the day to make sure you have enough juice each morning to get the generator cranked. If you’re in a pinch, the pull cord sits on the front end for your morning workout.

Seriously, though, the electric start is nice, but I am able to start the generator on the first pull. So if you have to resort to pulling, it’s not much trouble – at least at the beginning of the relationship.

There’s also an auto choke that works in tandem with the electric start. It’s one more level of convenience to get you working more quickly.

The tank holds 6 gallons that should run for 9 hours at 50% load. So if you need 3500 watts or less, a tank of gas will run you all day on the jobsite. If you’re running a higher load, you’ll want to have an extra can of gas on hand. 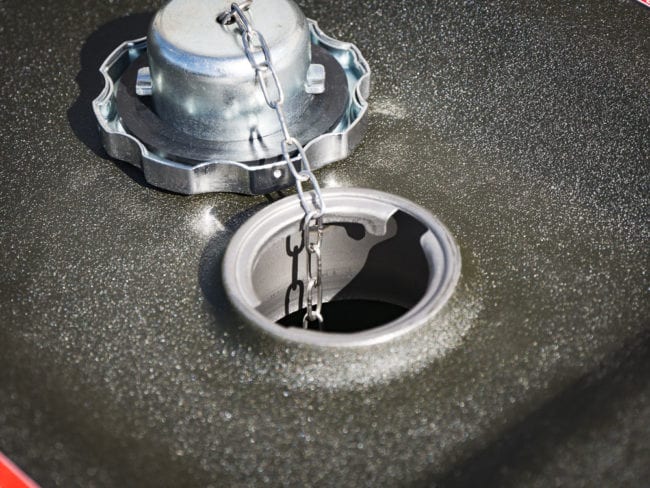 When you’re talking emergency power, the numbers don’t change. But keep in mind everything you’re trying to connect. Lights and small fans have a small draw, but running an air conditioner is a different ballgame. When you start running above 3500 watts, you’re going to reduce your runtime, so it’s not unthinkable that you’ll need 18 – 20 gallons of fuel per day that you expect to be out of power.

So the big question people always ask is “How much power do I need?” On the jobsite, there’s not much you’re going to come across that will take more power than you need when it comes to power tools. Certainly, nothing running a 15-amp motor like a table saw or miter saw is going to challenge it – even if you use them at the same time. 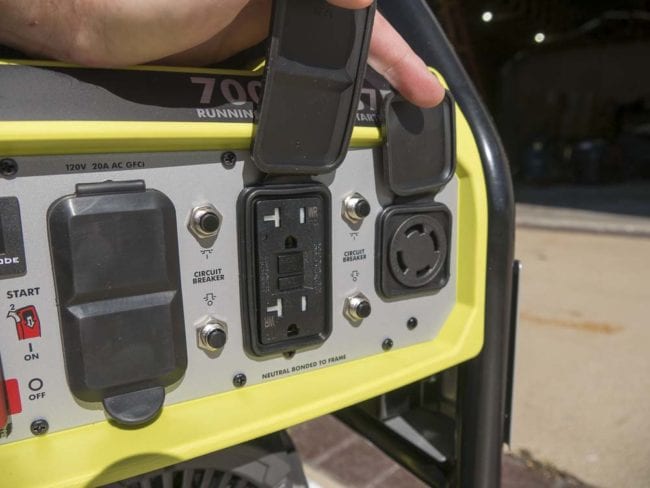 But if you are using several tools at one time, add up the load each requires and include the greatest startup power you’ll need. It takes a little effort, but you can be confident knowing how much you actually need. Just remember you’re burning through fuel faster as you increase the load.

When it comes to emergency power, keep in mind the difference between need and want. Here in Florida, food will spoil quickly, so you need to run the fridge. Air conditioning is nice, but running a couple of fans will be a much wiser use of your energy resources to keep the generator running critical systems like your water pump longer.

There are a lot of generator choices at the $1000 price point for you to consider. On the surface, The Ryobi 7000-Watt Generator doesn’t seem to stand out from the crowd. The rated watts, electric start, and outlets pretty much fall into line with what you can get from several other brands. 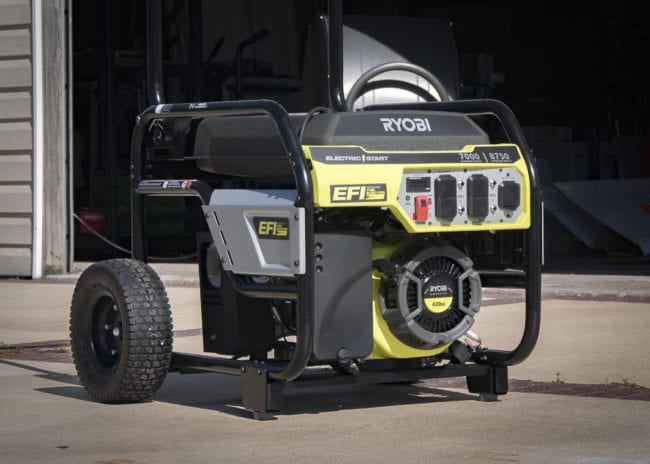 But what you don’t really see at this level is the electronic fuel injection. That may not seem like a big deal, but you need to move up in price point to find it on other models and it reduces maintenance downtime while improving your fuel efficiency. Since everything else is pretty close, that’s a feature that tips my purchasing dollars to the Ryobi side.

Home Depot is Your Ryobi Sale Headquarters This Holiday Season! This year, The Home Depot has some really impressive Ryobi Black […]

Having worked on cars all my life, since the mid 80’s or so most cars had electronic fuel injection, I’m wondering why a choke is needed on this generator? There is obviously some sort of electronics running the fuel injection, hence the “E” in EFI, so why don’t those electronics just make the mixture richer on a cold start. Or is that what you’re calling an “automatic choke”? If it is, then that’s the incorrect terminology because that’s not a choke. The correct wording would be that the EFI richens the mixture on cold starts. It’s longer, but it’s the… Read more »

Why do you have to charge the battery separately and not have it charge while you are using the generator? My current generator charges the battery automatically when in use so I don’t have to think about it. How many decibels does it put out ?

That thing is a monster. Very cool. I keep crossing my fingers to see them take their pressure washer knowledge and 18v tool knowledge and put together a sprayer of sorts for cleaning the worst of off bikes/atvs/toys/etc before loading them back on a vehicle. An optional water heater for the tank would be super cool too. There’s really nothing too decent out there now that doesn’t require gas or a plug in power source. I don’t think it would need mega power or super long run time either.

Keep up the good work!

How to Use a Keyless Drill Chuck | You Might Be Doing it Wrong!

October 23, 2022
MENU
Want more? Join our newsletter and get the latest tool reviews every week!

And...we'll even send you our "Best Tools for Your Hard-earned Dollars" white paper!
wpDiscuz
4
0
Would love your thoughts, please comment.x