The Kobalt Pass-through Socket Set and Universal Socket Set are getting ready to hit stores in time for Christmas, and we got a sneak peek at these two new tool kits. Kobalt has been really big on improving its line of automotive tools ever since their debut of a brand new line of Kobalt mechanics tools back in 2011. Those tools added a more comfortable grip on their wrenches and ratchets, and introduced the new Red/Blue SAE/metric color guidelines and laser markings on their sockets. It’s good to see Kobalt continuing to think through what types of innovations are most helpful to mechanics and those who need the maximum flexibility and use from their sockets, wrenches, and ratchets.

Everything seems to be tagged with an “X” to make it seem like a big deal, and the Kobalt Xtreme Access socket set certainly doesn’t fail to capitalize on this trendy naming scheme. This socket set is actually a pass-through style system that grabs each socket from the outside, using a ratchet with a 3/4-inch opening. Because of the way the system works, you can use it in situations where longer bolts needs to pass all the way through the socket. It keeps you from having to use deep well sockets or switching to a standard wrench or ratchet. 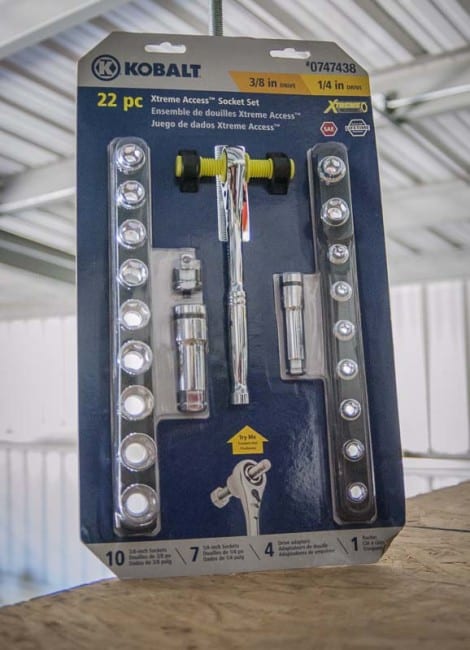 The kit is well-made, and includes everything you’ll need to perform light duty tasks. You won’t be putting on any tow hitches or installing large steel beams, but for bolts under 3/4-inch, simpler automotive applications, or working on gas powered lawn equipment, this Kobalt pass-through socket set should work perfectly.

The Kobalt Universal Socket set works with six different fastener types, including: 6-point, 12-point, spline, star, square, and most rounded fasteners. Like most of these new universal sockets, Kobalt’s idea was to eliminate the need for unique sockets for each and every nut type on the market today. As most mechanics will tell you—these universal sockets really do work, and they are quickly gaining acceptance in the marketplace. This kit includes the most common sizes in both Standard (SAE) and Metric (MM). Since the expected retail price for this kit is under $40, I think the build quality, features, and capabilities makes this a fantastic general use set. 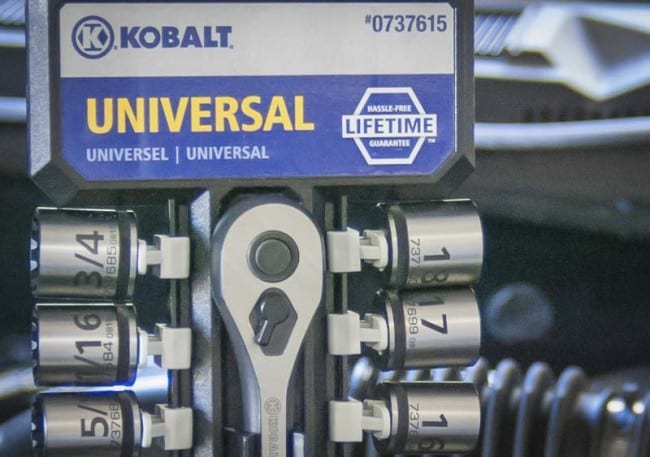 It’s impossible for us to tell you how well these sockets will hold up after years of use, but we can at least tell you how they feel—and how they appear to those of us who have used products from most of the competition. With the Kobalt Xtreme Access socket set you get a very robust kit with a good variety of sockets and a 72-tooth ratchet that can get you out of some very cramped positions. I’ve been a fan of Kobalt’s 72-tooth ratchet since they re-introduced it back in 2011. And this set isn’t exactly new, but it’s a re-launch with some packaging and tool kit improvements that make it a compelling buy for those looking to meet a variety of needs on a budget. The redesigned ratchet is now more of a mechanic’s tool—and the padded blue/black handle is gone. The addition of the 3/8-inch quick release socket adapter is also genius, as is the fact that it comes with 17 different SAE and MM (metric) sizes.

The Kobalt Universal Socket Set is beautiful to look at, and the design of the 3/8-inch ratchet screams “Pro”. The handles are rounded where you need them to be—so your hands won’t tear up on any edges, but Kobalt added some grip rings at the top and bottom of the steel handle for easier use when you’ve got grease on your hands…which is, like, all the time, right? I like the robust ratchet direction switch. I’ve used ratchets with “indecisive” switches that simply aren’t well-built and don’t give you an authoritative “click” when you activate the switch. The look of this set, its build quality, the way it feels in the hand, and its great value make this (and the Kobalt Xtreme Access set) an easy purchase. If it’s time to upgrade your ratcheting socket set, take a look at these once they hit Lowe’s stores.

In preparation for reviewing the next-generation Kobalt 24V cordless reciprocating saw, I went back and read Clint’s review of the […]

Milwaukee Reaches New Lengths With M12 Fuel Extended Reach Ratchets Whether you’re a professional mechanic or a recreational gearhead, you […]