The jig saw plays an integral part in what I do as a trim carpenter. It’s a tool I’ve used for many, many years, and I have my favorite features and characteristics which I’ve grown accustomed to over the decades. That’s both good and bad when reviewing a new product. It’s good because I have tons of experience with these tools. It’s bad because it’s easy to be reluctant about a new tool when you’ve used a different model for a long time—you tend to get used to a particular tool’s idiosyncrasies and characteristics. The challenge was to see if the Ridgid R8831B 18V orbital jig saw could pry me away from what I was used to.

The first time I got to use the Ridgid R8831B 18V cordless jig saw was on a truly practical application. I needed to trim out a newly-renovated music room, and it was time to cut the pocket door (which was, of course, already hung) so that it could accept a 2-1/4″ x 1-3/4″ lockset. These are never fun. Before I began, I remembered that I had the new 18V jig saw to test (still in the box in my truck), and this seemed like a great application. Pulling it out, I set it aside as I drilled two 1/4″ holes on the inside corners of the cutout area. Using a finer 14TPI general purpose, vented Ridgid blade, the cut was a cakewalk—with one exception. I really like to see my blade clearly, for accuracy, and the chip shield seemed (to my eyes, at least) to be a bit prohibitive in that area. This also brought to mind the fact that the Ridgid R8831B lacks any sort of LED light for the cutting area—a feature that was very much missed. Maybe my eyes just aren’t what they used to be, but it seems like every new cordless tool has an integrated light these days, and this jig saw would be much improved if it had one.

After that job wrapped up, I further continued my shake-down of the tool in the shop, trying out straight- and scroll-cuts on both 1x and 2x material. Again, using a 14TPI Ridgid blade, it closely followed some loose radius cuts in 3/4″ birch ply as well as 3/4″ poplar using the “0” (non-orbital) setting. I next grabbed a 10TPI blade and set the tool to its highest orbital setting. With this, I made some straight cuts through a spruce 2×6. I was impressed. This jig saw mows through 2x material as quickly as a reciprocating saw, but with much more accuracy and a remarkably clean cut. 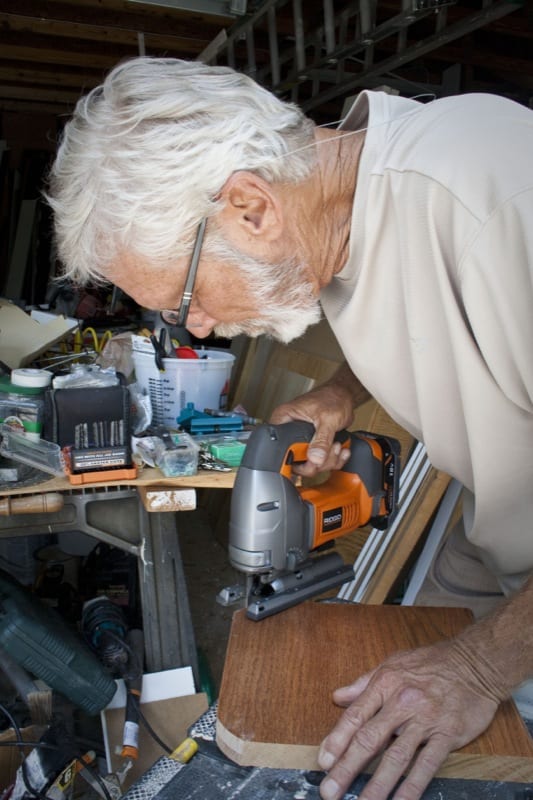 Scroll cuts on 2x material, perfect for shaping pergola ends, etc., were efficient and also surprisingly clean. This seemed at least partially due to the vented Ridgid jig saw blades I was using from their 10-piece General Purpose kit. I noticed a very minimal amount of blade lean during the cuts, and it was easy to control the saw and get good results—even when using full-size blades during scroll-cuts. 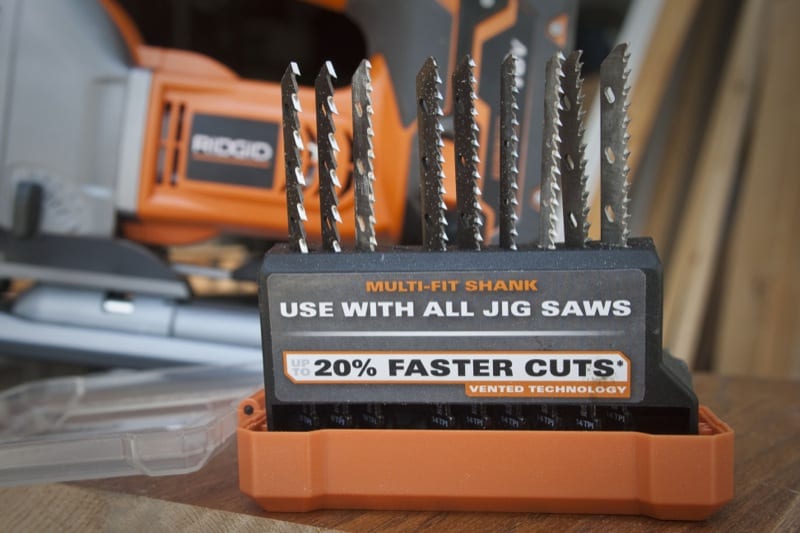 The Ridgid R8831B jig saw, which is sold as a standalone tool for just $119, comes with a few pretty helpful features. For example, the saw uses a tool-free blade change mechanism. While this is nothing new, a lot of the older tools I’ve used over the years required an Allen key to change out the t-shank blades. Interestingly, Ridgid’s new blades will work with any jig saw blade system and feature a universal shank. A variable speed dial also helps when you want to match the speed to the type of material you’re cutting through or the type of cuts you’re making.

On the side of the tool is a four-position orbital lever that lets you tun off the orbital action or crank it up to its maximum setting for when you want to make fast but accurate cuts. The grip on the tool is nice, and it affords excellent control during use with no slippage. My hands also didn’t get uncomfortable, even when giving the tool an extended run. I’m used to the overhead style of jig saw and so the shape of the R8831B’s handle seemed right in line with what I use almost every week. 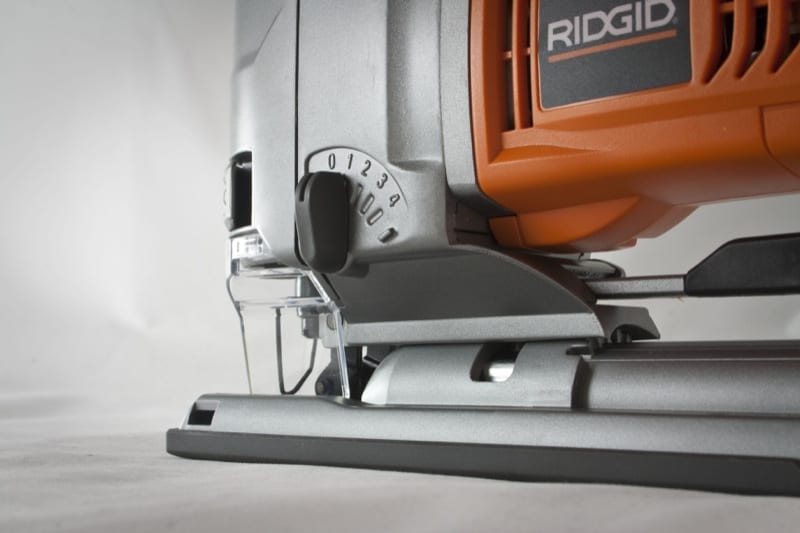 I do a lot of detail work that has me cutting on some pretty expensive and finished pieces of wood. Typically, that means I end up covering the steel shoe of my jig saws with some blue painters tape. With the nice no-mar base plate on the Ridgid, that’s no longer an issue. The key is taking care of the plate, so be sure to remove it when you don’t need the protection. 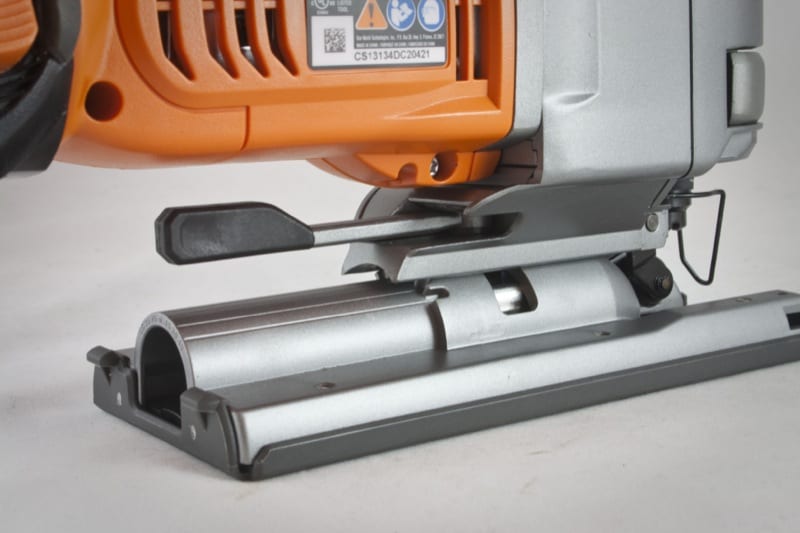 Durability is a big deal, at least for me personally, in my line of work. I tend to toss tools into the back of my truck and seldom use carrying cases (which I suppose is good since the Ridgid doesn’t include one). When loaded with the recommended extended-run battery pack, this jig saw is heavy enough to offer a lot of stability during cuts. Even though it has some heft, it still feels like it will take a beating—the everyday kind, not the “throw it up in the air and see if it can survive an impact on concrete” kind. It also uses all-metal die-cast gears, so the guts seem to be just as tough as the rest of the tool. One area that doesn’t seem as locked down is the blade clamp. It had a little more play than I’m used to, and it’s movement seemed related to the use of the tool-free blade-change mechanism.

All in all, this is a handy and convenient tool—especially for the price. The Ridgid R8831B 18V orbital jig saw is even more enticing when you figure it comes with Ridgid’s Lifetime Service Agreement. That means free parts and free service for life. Not a bad deal. There are a few things that could be improved, like the addition of an LED light and a dust collection vacuum attachment, but at $119 it’s hard to find much fault. For those doing a ton of fine work you may want to keep your corded model handy, but for general use and portability this is a great tool—even more so if you already own several Ridgid cordless 18V products.

David Delk has always enjoyed working with wood, ever since his teen years. Naturally, this landed him in the carpentry business. He has over 35 years experience that spans a couple decades of trimming out new construction to his more recent work of designing cabinetry and custom fabrication. Right now, David is partially retired and enjoys taking on select "old school" finish and trim carpentry work. We asked David about any pet peeves. The solitary answer: dull blades.

Anyone dare to compare to dewalt cordless? Dewalt has 3000 rpm, ridgid 2050, that’s around 33% lower. I have used dewalt cordless and it’s a fine tool. Just wonder how ridgid is as good as dewalt with such low rpm, in comparison to dewalt.

Thanks for posting this review! I was on the fence about picking up one of these, but thanks to your work I’m ordering one today.