The new Johnson Level 1707-4800 48-inch long Glo-View Heavy Duty Aluminum Box Level can definitely help you get things straight, even in a dimly lit room, thanks to its glow-in-the-dark level vial surrounds. The other feature of this level – one that is almost better than the glow-in-the-dark feature – is the domed level vial that offers 320 degree visibility. With a oversized aluminum box frame, precision machined edges and faces and large size hand holds, this level is a carpenter’s dream.

The new Johnson Level 1707-4800 Glo-View Aluminum Box Level can definitely help you get things straight, even in a dimly lit room, thanks to its glow-in-the-dark level vial surrounds. The other feature of this level – one that is almost better then the glow-in-the-dark feature – is the domed level vial that offers 320 degree visibility. With a oversized aluminum box frame, precision machined edges and faces and large size hand holds, this level is a carpenter’s dream. 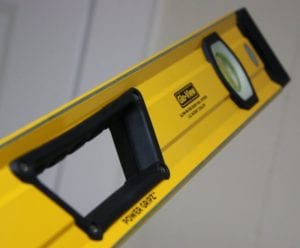 Sometimes, when we think of levels, it is hard to imagine how they can be improved on too much. Let’s face it, they are pretty much rigid, flat pieces of wood or metal with level bubbles in them. Oh, but wait! the new Johnson Level 1707-4800 48-inch Glo-View Heavy Duty Aluminum Box Level is so much more. This level is made of lightweight aerospace aluminum and is available in standard lengths of 24″, 72″ and 96″ in addition to the 48” long model that we received. This level, by design, is reinforced thanks to the ridges and shape of the box cross section. The whole length of the top and bottom surfaces as well as the edges are precision machined to a guaranteed tolerance of .0005 inch of flatness. This box level weighs in at 2 pounds 11 ounces, which, even though it weighs a little more than other similar sized levels, actually conveys a sense of quality and durability. The overall dimensions of this level is 2-13/16″ in height by 1-3/16″ thick and 48″ in long.

The Johnson Level 1707-4800 Glo-View aluminum box level vials have an accuracy of .029 degrees, which is pretty much standard amongst most all level makers. The level vials on this Johnson Level are domed, however, and filled with a specially colored fluid that makes them not only easy to see when looking straight at them, but also able to give you 320 degrees of visibility. Combine this with the built in Glo-View vial surrounds and you can be framing and setting cabinets in dimly lit areas with ease. The trick with the Glo-View is that it does need to be ‘charged up’ by a light source of some kind periodically while in use to keep the glowing effect at its brightest. This might seem like a slight inconvenience,but it is better than having to replace batteries in a LED lit level. The ends of the level are protected by oversized and rubberized impact pads that, according to the factory, can withstand a 10 foot drop. About mid-way down on each side of the level are large rubberized hand grips that are fastened in place with screws. We have noticed some other manufacturers going for a more sleek look with no visible fasteners, but this also leaves the handles feeling loose inside the box level frame. No loose or moving parts on a level is a good thing. 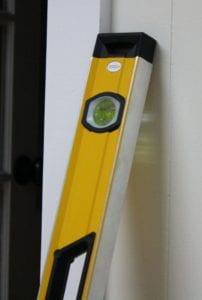 The Johnson Level 1707-4800 Glo-View aluminum box level was easy to use and test out. On most construction projects, a level is as common as a hammer and gets used almost as much. Seeing how most construction projects don’t always have power while a project is in progress, the guys end up working much of the time in dimly lit areas. When we showed up with this level to one of our favorite contractor’s projects to try it out, the guys were quickly won over with its brute tough construction and the sensibility of the Glo-View vials. But more than the Glow-in-the-dark capabilities, almost all the guys noticed how visible the vials were and how easy they were to read; even when you could not look straight at the bubble.

At our shop, the precision straight corners and hefty feel make it great to use as a straight edge when cutting large sheet materials and also doing layout work for different projects. We did find that in a pitch black room the Glo-View feature did glow, but with limited effectiveness, since it does not put out quite enough light to illuminate the vials for good reads. In dimly lit areas, the Glo-View was more than effective and we noticed that when we used a bright flashlight to charge up the Glo-View, it would last for plenty of time to do the work we were doing. If you’re working in the dark, you’re going to need to lean on more than a level to get you the necessary light. At the end of the day, the overall size, color and domed shape of the vials were our favorite feature for this tool along with the Glow-in-the-dark features being a distinct bonus. 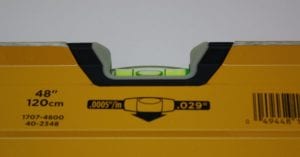 The Johnson Level 1707-4800 Glo-View aluminum box level should be an easy choice if you are looking for a professional grade tool. Given the sturdy design, precision accuracy, easy to see vials and the nifty glow-in-the-dark features, this level really excels which is why we gave it a 9/10 on our Performance scale. With a very reasonable street price, you will be hard pressed to find a better deal and we gave it a Value rating of 9/10. A good level is a critical part of any construction project and the Glo-View Heavy Duty Aluminum Box Level would be great choice for any contractor.