Ryobi decided to follow the Craftsman Nextec Hammerheadâ€™s lead and came out with their own version of a cordless Auto Hammer just in time for the 2009 Christmas Holiday Season. Since this tool seems to be a popular gift item this year, and just about every Home Depot store has a sample station set up so you can test it before you buy it, we decided to put it through our own battery of tests. In the past we have been pleasantly surprised by the balance of quality, features and price of the Ryobi brand products. Read on to see if this tool lived up to our expectations.

Ryobi decided to follow the Craftsman Nextec Hammerhead’s lead and came out with their own version of a cordless Auto Hammer just in time for the 2009 Christmas Holiday Season. Since this tool seems to be a popular gift item this year, and just about every Home Depot store has a sample station set up so you can test it before you buy it, we decided to put it through our own battery of tests. In the past we have been pleasantly surprised by the balance of quality, features and price of the Ryobi Auto Hammer. Read on to see if this tool lived up to our expectations.

Our sample tool came in a full retail cardboard box that detailed all the selling features of the tool. Inside the box, the tool came in a zippered green and black storage case that conveniently held in place the Auto Hammer, quick charger and single 12v battery. There is not a lot of setup involved in order to use the tool, other than to plug in the charger, charge the battery, and go to town. The Auto Hammer has a main body constructed of bright green ABS plastic with black rubber overmold that covers at least 75% of the tool. In the event that this thing gets wild on us, we’re pretty confident that we’ll be able to keep a good grip on it. The 12V lithium battery that is included does not follow the mold of many of the sub-compact tools on the market where it fits up inside the base of the handle. Rather, Ryobi takes a more traditional approach with a rectangular style exterior-mounted battery that gives the tool a good platform so it can stand up on end. Both styles have their advantages and disadvantages. 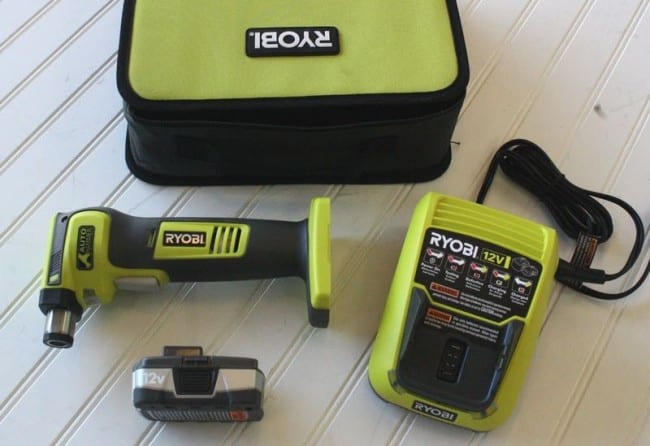 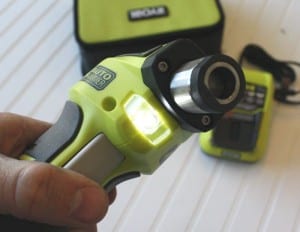 Overall, the tool felt well-balanced in the hand and comfortable to hold on to. On the nailing side of the tool, there is a built in LED work light that effectively illuminates the work area where the nails are supposed to be driven in. The sleeve that protects you from coming in contact with the hammer anvil has a built-in magnet so that you can place a nail inside and it will stay put. After spending some time with the Craftsman Nextec Hammerhead Auto Hammer, we were pretty surprised at how similar the Ryobi was to that tool. Aside from the battery configuration, the tools were nearly the exact same weight, overall size and shared the same basic specifications. Even the trigger placement, the nail sleeve and LED lights appeared almost identical. Before we started our testing, we took a guess that these tools may have been made by the same OEM manufacturer.  In industry, it is a common practice to use a common OEM, but many times the outward appearances are changed enough that most consumers can’t tell. To us, this was not quite the case for the Auto Hammers. The even bigger question on our mind was: will this tool “eliminate manual nailing” like the packaging claims? 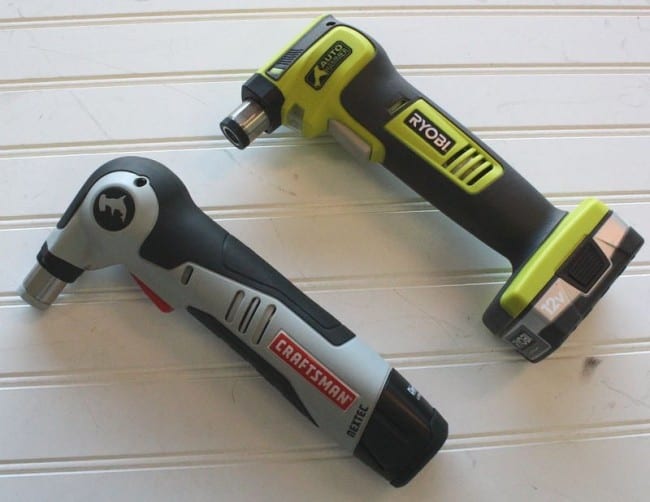 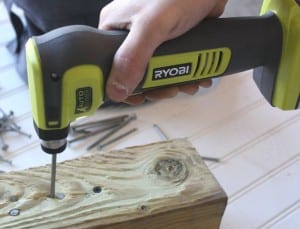 With a freshly charged battery loaded into our tool, we started our testing of the Ryobi Auto Hammer. So that all things were equal and fair, we used the same piece of nice, dry pressure treated 4×4 lumber that we tested our other cordless nailers on. There are several claims on the packaging and we started out with the first of these: the Ryobi Auto Hammer will drive 3-1/2″ 16d common nails. This is one of the most common size hand drive nails used in construction to build everything from houses to decks. We took a nail, loaded into the collar and went to town. After about 25 seconds it became pretty evident that we were not going to get the nail to go more than about 2″ into the lumber. Thinking that we might have hit a hard spot or something else, we tried to drive another one of the 3-1/2″ nails in a different spot and had similar results. The fact is that, even when we put our weight behind the tool and used both hands to try to add additional leverage, the Auto Hammer was simply not able to set a single 16d nail that we tried. It was about this time that our ears were starting to hurt, too. After about 20-30 seconds of trying to drive a nail, the noise was unbearable. With dB SPL readings in the 108 to 112 range, we definitely had to start using some hearing protection.

We next tried some 12d nails and still did not have success in being able to quickly and fully drive the nails flush, so we moved to yet a smaller size nail. With 2-1/2″ 8d common nails we finally found a match for the tool. The Ryobi Auto Hammer was able to set the nails flush after 5 to 7 seconds of driving – without us having to put extra force or leverage behind the tool. Even when driving the shorter nails, the noise level did not decrease, but since the length of time needed to drive the fasteners was relatively short it was perceived as being slightly quieter – or let’s say a little more tolerable without using hearing protection.

If you are interested, please read our review of the Craftsman Nextec Hammerhead Auto Hammer for a full breakdown of that similar tool.

If you are still wondering how the performance of this tool compares to other similar tools, please check out our comprehensive Auto Hammer vs Palm Nailer Shoot out article.

The bottom line is that while it’s a creative and interesting product, we are more or less disappointed with the performance of the Ryobi Auto Hammer. Given that the Craftsman version has been out on the market for over a year prior to the launch of the Ryobi version, we would have figured that Ryobi might have taken that time to find a way to boost power to make their version smoke the competition. Rather, we saw that since the Craftsman version has been a good seller (though not necessarily a good performer) they decided to follow in the same exact footsteps just to sell product. For our Performance rating we give this tool a dismal 2/10 since it does not eliminate manual hammering and it does not drive larger size 16d and 12d fasteners as the packaging claims. For our Value rating, we give this tool a 3/10, putting this tool squarely in the “overpriced gadget” category, rather than alongside a more useful tool. If you have to have an Auto Hammer, the good news is that you can save yourself around 10 bucks on the Ryobi verses the Craftsman model.