My collection of yellow spirit levels are still in use more often than not, but for greater distances and critical layout operations, this Makita green cross-line laser level has earned its place on my job sites.If you've been holding out for a lithium-ion cross-line laser, Makita puts together one of the most complete packages with their 12V CXT SK106GDNAX.

In all phases of construction, the three fundamental principles of level, plumb, and square have guided builders for ages. From the architects of the pyramids to the modern-day builders of superstructures, these principles form the foundations they built upon. Man has invented numerous tools/methods over the years for ensuring level and plumb, none of which compare to the ease of operation and speed of today’s self-leveling lasers. What a time to be alive, right?

My collection of yellow spirit levels are still in use more often than not, but for greater distances and critical layout operations, this Makita green cross-line laser level has earned its place on my job sites.

If you’ve been holding out for a lithium-ion cross-line laser, Makita puts together one of the most complete packages with their 12V CXT SK106GDNAX.

I chose the Sk106GDNAZ for its green line and its 4 plumb and level points feature. If you’ve been using a red laser all these years like I had, you will be very happy with the switch to green as visibility and overall brightness are noticeably better. 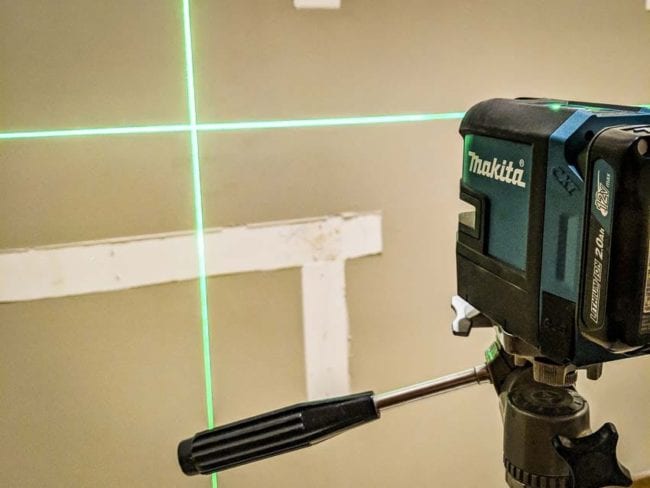 The line seems to be thinner than my old lasers as well which translates to increased accuracy in my experience.

With the plumb dots feature, I no longer have to carry two separate lasers as this one unit can do it all.

Using the included stand, I transferred baluster locations on a handrail job and found the green dots especially helpful given that this rail was pre-stained. The level dots can be used to easily check a room for square and making the needed adjustments in flooring or panel applications.

On the geek side, the laser is a Class II, 525 nm. In easier to understand terms, the human eye picks up green wavelengths better than red, so green appears brighter to us.

This Makita green cross-line laser level has outstanding range. Visually, you can pick it up out to 115 feet and that extends to 262 feet with a detector. Just looking at the red version of this laser, the visible range drops to just 82 feet (which is pretty solid for a red laser) while the detection range is still 262 feet. 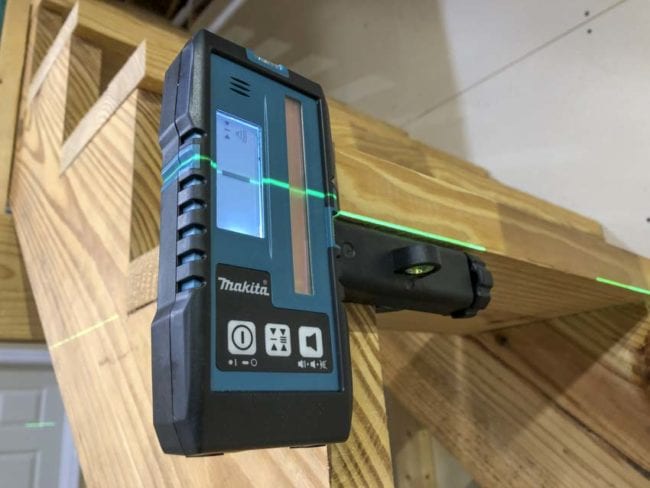 But even compared to other green cross-line lasers, these are excellent numbers. The PLS 180G outshines most others and it still falls shorts with a visible 100 feet and 200 with a detector.

Accuracy has proven to be spot on out of the box when I’ve checked it against my door level which I know is right. You’re looking at 1/8-inch accuracy at 33 feet, which is about as good as it gets. There are a couple that can pick up an extra 1/16-inch, but most Pro models settle in at 1/8-inch with cheaper models dropping to 1/4-inch. 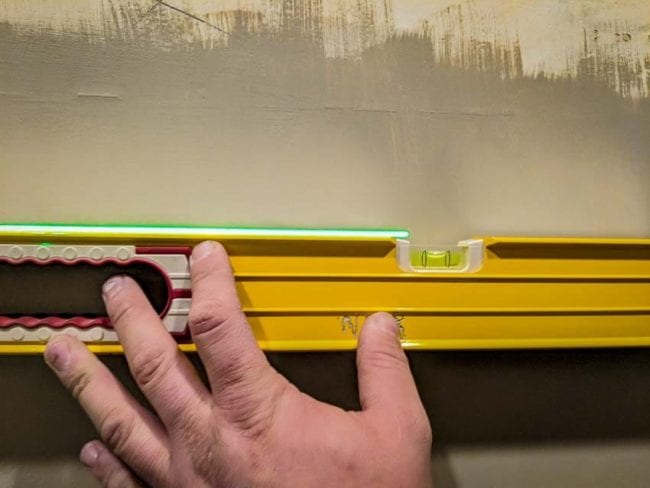 Like most lasers in this class, it self-levels up to 4º and takes less than 3 seconds to stabilize.

This Makita green cross-line laser level (and several other models) use the 12v CXT battery as a power source. Using an optional adapter (which I had to have and highly recommend) you can run them with the more common 18v batteries as well.

Makita advertises a run-time of 10 hrs on one charge of the 2.0Ah battery which is a really long time of running a laser when you think about it. You can flip the laser to a low power mode to get that kind of runtime.

Using the 18v adapter with a 5.0 Ah pack gives you 275% more capacity than the 2.0 Ah, 12v pack that comes in the kit. At that point, runtime is almost a moot point, even on high power. I’ve only charged my battery once with several layout jobs during that time frame. 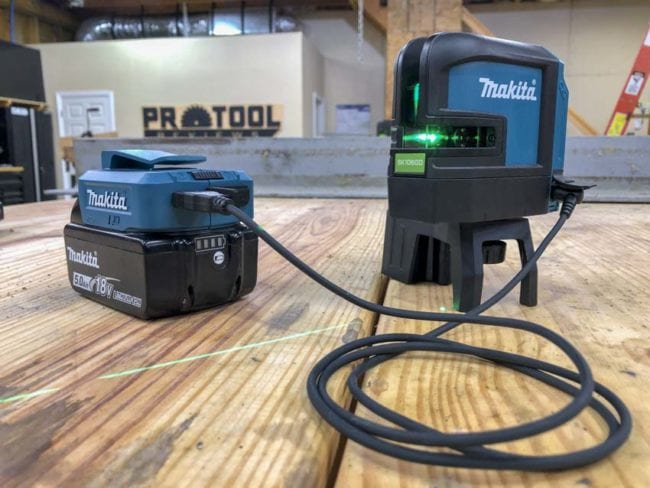 This Makita cross-line laser is very easy to use. There’s only one button to worry about plus the pendulum lock. The controls work on a 4-press cycle. The first one turn the laser on with both beams lit.

The next press shifts to horizontal only and the next to vertical only. The fourth press turn the laser off again. 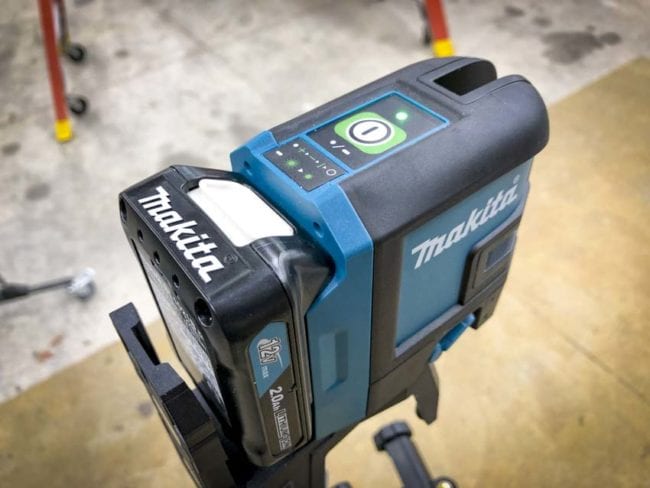 There are no separate controls for the 4 spots. They’re on anytime its corresponding beam is on. The good news is that they’re very bright in contrast to the lines, so there’s no mistaking where they are.

The pendulum lock is on the side. If you forget to unlock it, your first button press will only give you the horizontal beam and it will blink every 5 seconds to let you know it’s locked. Another button press flips it to vertical only. You won’t be able to have both lines on at the same time.

The blinking can be a little annoying while you’re trying to set an install at an angle other than perfectly horizontal or vertical. However, it’s a handy indicator if you or your apprentice are prone to forgetting the lock.

Why Upgrade to Lithium-Ion? 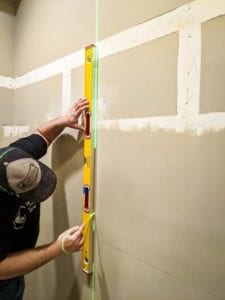 More and more tradespeople are turning to lasers as a way to simplify layout and installation tasks. One reason for this shift is that a properly calibrated laser always tells the truth about a room and fast.

I’ve been using lasers around ten years now and have owned a variety of them along the way. I have had the same plumb bob and cross line lasers for several years now after upgrading from the lower end models I had before, and they have undoubtedly made me money in that time.

The only complaint I’ve ever had with them was their reliance on AA batteries. As I said, my levels see more use on a day to day basis and as such, my lasers are often tucked away with their batteries removed (to avoid corrosion) inside my house and outside of the elements they’d be subjected to in my van.

On more than one occasion, I have grabbed my laser as I’m heading out for work in the morning and left the batteries behind only to realize this once I had arrived on my jobsite.

With manufacturers now making lasers compatible with their battery platforms, it just made sense to upgrade once again. Seeing as I am all in with Makita cordless tools, I held out until they offered their version and I am glad I did.

One thing I really appreciate is how durable this laser is. Makita recesses the laser pendulums well into the housing to give it additional protection in the event of a fall.

Rubber overmolds are strategically in place at both grip and fall points and I find the whole tool has a very solid built feel to it. I always make sure and lock the pendulum before moving the laser from its stand and I believe it will be the last laser I need to buy. 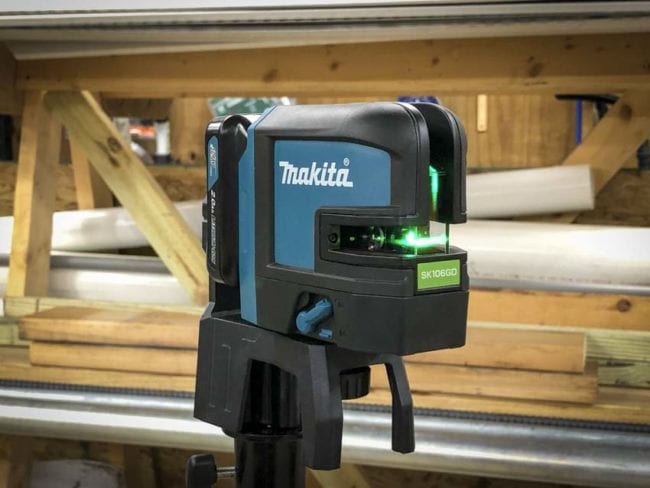 This Makita green cross-line laser runs $449.99 as a bare tool and $549.99 as a kit with 2.0Ah battery. That’s more than similar models from Bosch run and closer to what we see from Pacific Laser Systems (a Fluke company), although they don’t have a lithium-ion option at the moment.

The premium price gets you more than just a couple of extra spots, though. This is one of the highest performing lasers we’ve seen at Pro Tool Reviews. That combined with the durability of the laser and 18V adapter capability makes it something worth your serious consideration.

What Comes in the Kit?

We tested the Makita SK106GDNNAX kit. Here’s what all comes with it:

If you go with the bare tool, you still get the target card, L-adapter, and bag, but no battery or charger.

Chances are, you’re going to need a tripod at some point and we really like Makita’s TK0LM001F. It’s a full-size tripod that gives you just a touch over 7′ of height to work with. Its lowest position is 32″.

There are several things we really like about the design, starting with the fact that it’s well-built. A lot of the laser tripods we come across seem like more of an afterthought, but Makita’s seems purpose-built with a wide, stable base and rigid build.

Adjustments are smooth and the clamps lock the legs down tight. It’s also lightweight enough to easily transport and comes with a storage bag.

If you want to grab some of the accessories we paired with our laser, here’s what they run:

My collection of yellow spirit levels are still in use more often than not, but for greater distances and critical layout operations, this Makita green cross-line laser level has earned its place on my job sites.

If you’ve been holding out for a lithium-ion cross-line laser, Makita puts together one of the most complete packages with their 12V CXT SK106GDNAX.

Nathan Rinne is the owner of Rinne Trimcraft. A full-service custom woodworking, cabinet, and trim company that specializes in ornamental built-ins and beds at the Lake of Ozarks. You can see some of his work at www.rinnetrimcraft.com.

New technology is yielding more powerful cordless outdoor power equipment and tools. One new type of motor being integrated into […]

Nice review. The Makita laser level looks very similar to the Leica laser level in terms of operation and features. Even though the Leica is more expensive at $599 it does come with the 28-hour battery, AC plug, battery pack and various mounting options.