The FLIR One made a huge splash last year when it came out with the iPhone 5/5s based system. Sadly for all smart phone users that weren’t on the 5/5S platform, we were left wanting. That’s where the Seek Thermal camera comes into play. Rather than connecting to your phone like a cover, it simply attaches via your micro USB connection on many Android and Apple phones. The free app then takes care of the rest.

The Seek Thermal camera (and it’s extended range brother, the XR) are a little over an inch long and perhaps 3/4″ at it’s widest point. This is a pretty small footprint considering you’re only going to have it attached when you need it. The housing is a plastic construction that would be a bit disconcerting on a full featured (and priced) thermal imaging camera. This concern is really offset by the fact that it’s attached to your cell phone. Any bump or drop that threatens the Seek Thermal is also a risk , and perhaps a greater one, to your phone. 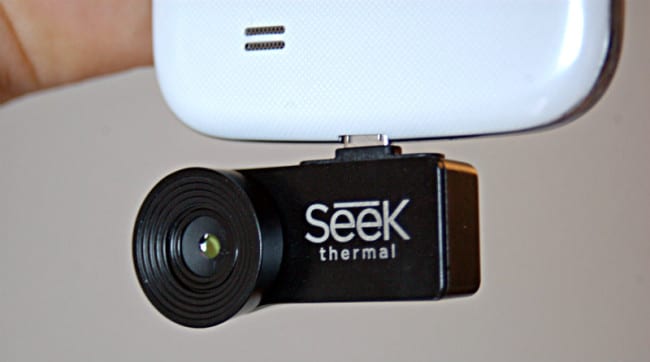 Since the Seek Thermal camera connects to your micro USB port, there will be a couple of potential drawbacks. First, not all phone covers are going to allow for use while in place. Second, some phones have the port flipped. You’ll want to be able to install it so that it faces the same direction as your phone’s camera.

Like the FLIR C2, you’ll hear an audible clicking noise as the camera auto adjusts to the conditions it encounters. This is normal, even though non-thermal camera users are used to smooth and quiet lens focusing. The unit comes with a waterproof plastic case for storage that’s pretty stout. It should easily protect the Seek Thermal camera from any damage while in your pocket.

Seek Thermal Camera in Use

Something to keep in mind when you consider the image quality with the Seek Thermal: this is a $250 cell phone accessory, not a $700 entry level thermal camera or $5000 thermal system. There are some tradeoffs. It does a reasonable job for what it’s designed for. Unless there’s a temperature difference of several degrees, it’s hard to see subtle changes around you. Sharp contrast, like this computer monitor, are much easier to recognize. 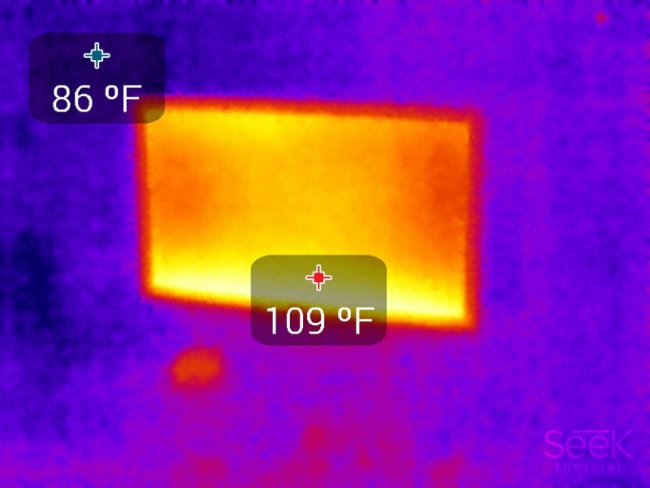 Since the thermal image isn’t always detailed enough to see what’s going on, you can change to a split view. This allows you to swipe the image to thermal or visual (from your phone camera) or to split the screen how you like. Using this feature makes it more obvious that I’m checking the efficiency of this window installation. 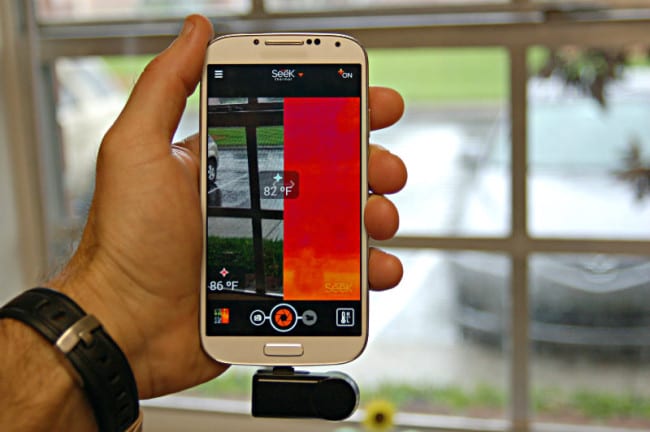 You have a choice of 9 different color palettes. I prefer to work in the classic iron or gray scale modes. In the home that I was looking for energy leaks in, I didn’t find that one palette offered a significantly better contrast than any other. There aren’t a lot of settings to change or get confused by with this system. It’s about as plug and play as you can hope to find.

The Seek Thermal camera has several temperature options. Most of the time, I used it in High/Low mode. This allows the camera to pinpoint the highest and lowest temperatures in the frame at any given time. If you want to highlight a specific point, you can use a single center point reading. The temperature can also be turned off and be changed between Fahrenheit and Celsius. 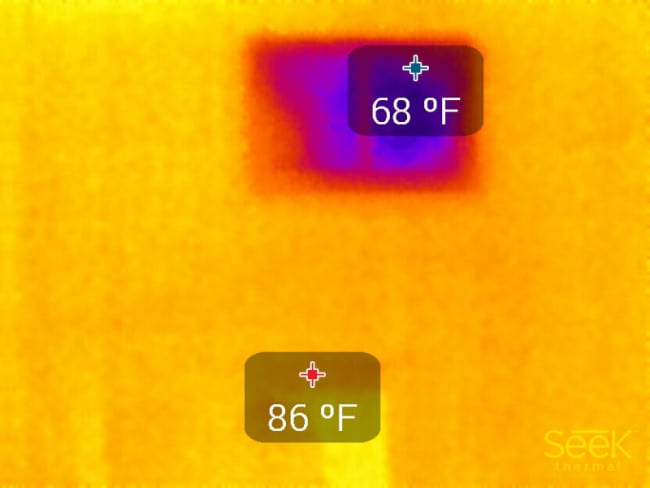 When compared to an IR thermometer, the Seek Thermal consistently ran several degrees higher. I checked a running AC vent for efficiency and had a difference of 5 – 6 degrees. Other temperature checks weren’t that severe, but it did tend to average 2 – 3 degrees warmer.

If you’re looking for an inexpensive entry into thermal imaging for your business as a pro, you’ll want something that offers a little more accuracy than the Seek Thermal camera. If you’re looking for an accessory that’s got some really fun applications, will get you a lot of “Likes” and comments on Facebook, and can do some basic diagnosis, then the Seek Thermal will be helpful to you.

As you take yourself out of the professional or prosumer tool world and enter where most mortals live, Seek Thermal’s possibilities expand. Outdoorsmen will love the ability to see high contrast objects, like animals, after the sun goes down. DIYers can detect energy leaks, water leaks, and electrical shorts. Enterprising young people can have a huge advantage in hide and seek. I’m sure you’ll find other uses as well. To see and be inspired by other users, you can check out the user gallery on Seek Thermal’s website.

DCS spends most of his time watching Mythbusters, trying to figure out what the labels that they blur out say, so that he can recreate the explosions. His hobbies include impersonating Chuck Norris doing an impersonation of Sean Connery and fly fishing. David does his own stunts.

Milwaukee M12 Cable Stapler Causes Electricians To Rejoice! Gone are the days of using a hand stapler thanks to Milwaukee. […]

Thermal cameras can be a lot of fun to play with, but for some of us, they’re valuable pieces of […]