The DeWalt DCD997 competed in our epic 50+ drill shootout where it performed exceptionally well. It's fast, has a great feature set, doesn't take up too much space, and won't force you to take out a second mortgage on the house. Where it really excels is in its power-to-weight ratio where it leaves most every other brand with work to do.

DeWalt is bringing much more function to the Tool Connect lineup with the introduction of several connected tools to go along with their Bluetooth batteries, tracking tag, and Bluetooth adapter. The DeWalt Tool Connect Hammer Drill is spending some quality time with us currently. We’re ready to break down what this tool is capable of and what you can expect from Tool Connect.

For starters, the DeWalt DCD997 is built on the foundation of DeWalt’s DCD996 premium hammer drill. At the moment, you’ll have a hard time finding a better model in the DeWalt lineup. If you already use the DCD996, this will feel very familiar to you and it specs out the same.

Tool Connect is far and away the biggest talking point about this drill. We’ll take a closer look at that in a moment. For now, you’re looking at a 3-speed brushless motor with your typical bells and whistles for a flagship hammer drill.

There are 11 clutch settings on the twist ring along with drill and hammer drill modes. You have a 1/2″ chuck and there’s a belt hook that you can install on either side if you like.

Below the trigger is a button to cycle through the 4 Tool Connect modes. It’s unusual (but not unheard of) to have the mode selection here in addition to the gear selection on top of the tool. Some quick math will tell you that means there are 12 total modes to work with. 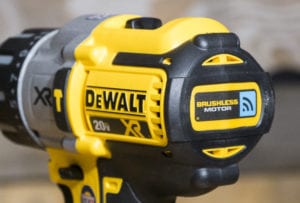 Discover much more detail about DeWalt Tool Connect in our definitive guide!

What about Milwaukee ONE-KEY Technology? We’ve got you covered there, too!

Let’s Get Performance Out of the Way

Before we dive into Tool Connect itself, let’s start with performance. The DeWalt Tool Connect Hammer Drill is capable of giving you 820 unit watts out of power – translating to roughly 841 in. lbs. of torque. There are certainly more powerful drills out there. However, for nearly every standard task you ask your drill to do, the DeWalt DCD997 will handle it. With the auxiliary handle to stabilize it, even tough cuts like a 3″ hole saw or a 1-1/2″ spade bit through 2x PT are pretty smooth operations.

Where I draw the line is mixing, hole saws over 4″, and concrete or metal drilling over 1/2″. Realistically, there are better tools than the standard drill class for those tasks anyway.

Performance of the drill wasn’t the first thing on my mind when this model arrived. Knowing its DCD996 DNA, I just didn’t have many questions as to its standing. What I was most curious about is customizing the modes.

On each setting, you can customize the LED work light’s intensity (including off) and duration. If you want to use the LED for several seconds or even minutes after you release the trigger, it’s useful. Scrolling all the way to the right, you can also toggle bind up control on or off.

When it comes to other settings, you can adjust the speed but not the torque. When you set a mode to a specific speed, you’re essentially using an electronic governor to tell the drill what the maximum speed is. It’s not perfect, though. I set up a simple RPM test to see how close my custom settings match reality.

The Home mode is preset and you can’t change anything. Modes 1, 2, and 3 are customizable. Here’s what I found in my test: 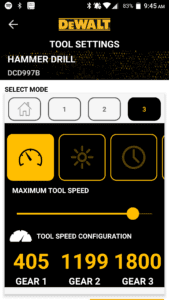 Once the battery settles into its 18V nominal voltage, the accuracy of the speed is within a pretty reasonable level of error. Notice that as you move up in customized speed, the variance grows.

With a battery at full charge, you have a tool running at 20V. Like you’d expect, the numbers are higher. What’s interesting is that the non-customizable Home mode is nearly identical in both battery states. Looking at the variance decrease with speed, it’s a safe bet to assume that the tool is settling down toward its nominal voltage as the test progresses.

What to Make of the Results

I’ll admit, I love numbers and quantifiable data. When we look at the results of the speeds, it becomes clear that DeWalt Tool Connect isn’t actively tracking how fast the chuck is actually spinning. It’s more likely controlling what percentage of the trigger pull it allows, which is why you get different results at different charges states.

However, it does seem like the tool is allowed to run at maximum speed when you’re not electronically governing it in the app, hence nearly identical stats on the Home mode at both charge states.

You’re going to get higher RPMs than you define in the app with a battery at full charge for a brief period.  However, once you settle into nominal voltage, you’re in the ballpark within a 6% margin of error. Considering we don’t have a need to pull an exact RPM while we’re drilling, that’s certainly good enough. What’s great is that we can dial in speeds in between what the 3 gears offer on their own. With larger wood boring and metal drilling, that can be a big help to optimizing drilling speeds. The downside is that whatever limit we place on the speed, we’re placing the same percentage limit on the torque – just like feathering the trigger.

With DNA that comes from DeWalt’s DCD996 hammer drill, the performance and ergonomics you expect are very present in the DeWalt Tool Connect Hammer Drill. What Pros need to decide is whether the additional control is worth the $50 premium you’ll pay.

Aside from a brief power boost you get with a fully charged battery, you’re going to be well within a 10% margin of error when you set the speed in the Tool Connect app. For most Pros, it gives you access to full trigger pull speeds you don’t normally enjoy. But is it better than just feathering the trigger and drilling by feel? I think it will be for some Pros.

Of course, balance all that with the diagnostic and tracking tools that also come with DeWalt Tool Connect. Also, keep in mind that it’s part of DeWalt’s Made in the USA with Global Materials effort and that the tool comes with a 3-year warranty.

Buy at Acme Tools
Buy on Amazon
Want more? Join our newsletter and get the latest tool reviews every week!

We’ve tested dozens of the impact drivers currently available to find out who makes the best impact driver in multiple classes. Our […]

When you put your hands on and test over 50 drills a year, you get a feel for who makes […]

Too Many Cordless Impact Wrenches To Choose From? We’ve Got Your Back! On the hunt for the best cordless impact […]

My company on the dewalt platform and these cordless hammer drills have the highest turnover rate next to 6″ metabo angle grinders.. however the grinders face extreme abuse and the hammer drills are pretty exclusively used for spotting holes in the deck and reaming out holes heavy flange(1/4 to1/2) Impacts are definitely the go to(and are very solid) i have to say The 18v hammer drills of yesteryear were far superior for heavy work in this sheet metal workers opinion.

I’ve had the Milwaukee ONE-KEY hammerdrill since it first came out. I thought it was more gimmick than function at first. But I love the options now. It’s my best sander, buffer, and polisher after getting used to it. This seems like an obvious copy. But I can’t blame them. It can make a real difference