The Hitachi C7SB2 7-1/4 inch 15 amp circular saw is a workhorse product which can be found for a very reasonable price if you look hard enough. Its clean lines, comfortable feel, and powerful motor make it a decent saw for cutting, but clumsy depth and bevel adjustments give it at least some areas of improvement. This tool will do well in any handyman’s kit and some professionals may even find its lightweight styling is worth a second look.

Hitachi is really pouring on the green with consistently updated tools that are ranked among the most favorite brands in many categories by contractors and do-it-yourselfers alike. But can this green machine come out on top when it comes to circular saws? We take the 15 amp Hitachi C7SB2 Circular Saw and put it to the test with our own “special blend” of torture tests and ergonomic standards. (By the way, if you’re interested in battery-powered full-size circa saws, check out which tool won our 7-1/4″ Cordless Circular Saw Shootout.)

The 7-1/4 inch Hitachi C7SB2 circular saw comes in a rugged green case that is form-fit to handle both the saw and up to 3 blades depending on their thickness. Also included is a 24-tooth carbide tipped blade, which is a lot like the batteries that come with any television these days – sure they work, but you might just want to replace these “freebies” quickly if you don’t want to run into problems down the road. A wrench is provided for removing the blade, but surprisingly it doesn’t have a place in the case that holds it securely, so you’ll end up throwing it in and allowing it to flop around loose. The case is made to hold the saw securely (and close) only when the blade is at maximum cutting depth, so you’ll need to extend the blade each time you return it to its molded coffin. 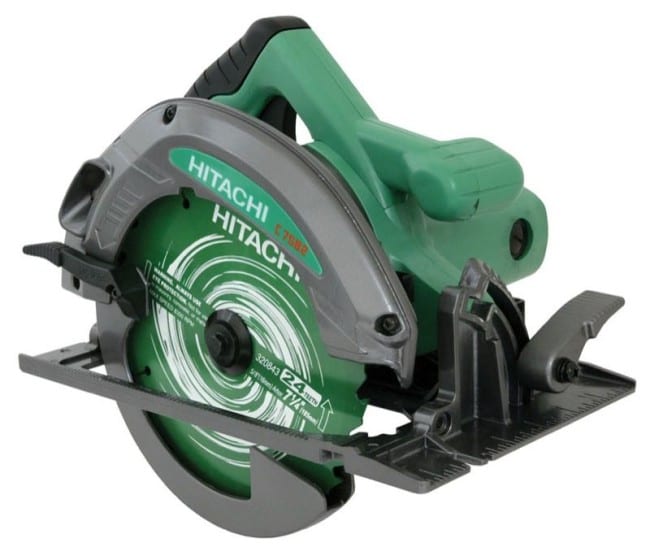 The body of the C7SB2 features easily removable motor brushes on each side – something that tells us Hitachi expects this saw to be around longer than most. This is a nice feature and we’re happy to see more and more manufacturers being considerate of their customers in providing ways to extend the life of their tools without having to replace them. If you search online you can easily pick up a pair of replacement carbon brushes for less than $20 shipped.

In terms of use, the Hitachi is pretty easy on the arms. At 11 lbs 6 ounces (including the attached power cord and blade) it comes in at over a pound less than some of the competition. The rubberized grip fits nicely in the hand and the saw gives a satisfying ‘click’ when you pull in the trigger. This purposefully built-in play also saves you from inadvertently activating the saw when you pick it up by the handle with an overly excited trigger finger. Even with work gloves on, there was plenty of space in the handle and trigger areas to effectively and safely operate the saw.

We found it easy to adjust the cutting depth and bevel angle, thanks to the extra thick locking levers. It is, however, very stiff to make the adjustments and I found myself wanting to place my foot on the base to ease the precise positioning of the blade. Adding some lubricant to the adjustment area can alleviate some of the hassle, and we’d love to see a more sophisticated spring-loaded mechanism in future iterations of this tool.

The sightlines on this tool are very good, and it did an excellent job at allowing us to cut straight lines without torquing or driving off angle. By the way, the 15 amp motor deserves a thick power cord. If you’re ripping into some pieces of pressure treated 2×6 (our favorite pastime), you won’t want to be using those flimsy 10A garden cords – this Hitachi will suck the power right out of your outlet when it needs it. Seriously, perform a high power cut on a piece of PT lumber and this thing will likely dim your lights.

The lower guard easily retracted when we attempted our plunge cut test and this also bolstered our opinion of the circular saw’s sightlines being above-par. A rubberized bumper cushion keeps the guard from slamming into the gear cover and even after much use it didn’t seem the worse for wear. The C7SB2 is simply easy to use and quite precise for a circular saw, especially when using a thin kerf blade for finish work.

The blade spins at an average of 5650 RPM, with our highest measurement coming in at 5779, just shy of the 5800 RPM stated spec, but not far enough underneath that it can’t be accounted for with respect to the line voltage. The combination of speed and torque seems to be about right, with the tool making quick work of most cuts we attempted. We used the saw to cut about two dozen rafter tails which we had to sister into an existing 1920’s home. For this we were using a DeWalt fast cutting construction blade which seemed to allow the Hitachi to do the trick without any difficulty. Our next test, however, would prove to be a doozy.

One of our most notorious torture tests included cutting about 50 feet of ridge vent into an existing roof. To accomplish this we took the saw, slapped on an Irwin WeldTec Marathon blade and went to town. This roof had two layers of 3-tab shingles and lots of nails. The blade was amazing, but what we’re noting for this review was that even after losing 4 teeth in the process (a miracle given the challenge), the Hitachi never once bound up. The motor did bear down and show signs of stress, but we were always able to keep it going and make the cut. This is a tough saw and it’s going to be a good choice for both tough jobs and the long haul.

Another test involved taking the saw, slapping on a backwards blade and ripping through four 16 foot pieces of Hardiplank (yes, we know they make Hardiplank saw blades especially for this). While the noise went up quite a bit due to the material being cut, the saw demonstrated a consistent ability to manage the masonry-like material and power through the job. You could tell the motor was under a lot of load, but it kept going until it emerged out the far side of the cut.

The Hitachi C7SB2 circular saw is a 7-1/4 inch 15 amp workhorse tool which can be found for a very reasonable price if you look hard enough. Its clean lines, comfortable feel, and powerful motor make it a decent saw for cutting, but clumsy depth and bevel adjustments give it at least some areas in which to improve. This tool will do well in any handyman’s kit, and some professionals may even find its lightweight styling is worth a second look.

Metabo HPT 10,000-Lumen Work Light Delivers Incredible Output And Durability Whether you’re working in unlit spaces or during the shorter […]

Best Work Boots 2022 | Most Comfortable Boots for Men and Women