Skilsaw's new SPT99-12 draws worm drives into the conversation with power that rivals some of the best jobsite table saws available.

So we’ve spent some time with the new Skilsaw SPT99-12 Heavy-Duty Worm Drive Table Saw to see what’s different from Skilsaw’s first worm drive table saw and where it fits in the realm of the best jobsite table saws.

There’s a lot to love on the SPT70WT-22 worm drive table saw. We really like the lightweight portability, stable stand, and mid-range power. But the Skilsaw SPT99-12 brings a beefier model with enough changes that it’s clearly a different class of saw.

The Skilsaw SPT99-12 Worm Drive Table Saw comes with, shockingly, a worm drive motor. The benefit here is that you typically get more torque than a direct drive – something you’ll notice more on rip cuts through 2x or 4x material than sheet goods.

When you look at a Skilsaw model number, the numerical part of the code matches up with a motor. The original worm drive table saw comes with a 70-series worm drive. This one uses a 99-series that packs more power.

Moving on to the accuracy side of things, we get to the fence system. We’re seeing more manufacturers move to the rack and pinion style fence adjustment and that’s a good move in my book. Skilsaw didn’t have it on their last model but add it here. The operation is easy, but it’s not the smoothest feeling. I’m tempted to put a little grease on it, but that’s just going to attract dirt and dust.

The extension lock is a little disconcerting at first. When you lock or unlock it, you hear a “pop” snapping against the table. The mechanism works similar to the way a folding table saw but snaps into place with much more confidence. Because the handle is plastic, it doesn’t inspire a ton of confidence. When we took a closer look at it, there doesn’t seem to be much risk of failure in the short term.

While the rack and pinion system makes the length adjustment more accurate, it also helps the accuracy of the fence itself. Most of the complaints around fences focus in on the fact that you can lock them down off square. By providing fixed points for the fence to lock down on, you virtually eliminate the issue.

The fence on the Skilsaw SPT99-12 Worm Drive Table Saw offers some versatility as it works from close to the blade out to support 30-1/2″ rip cuts. The support swings out of the way for most shorter cuts. But when you need a shave cut, it acts as the fence itself, giving you an extra inch between the taller fence to get the push stick in and reduce friction on some material. When you’re making longer cuts, the support swings into a lower position flush with the table to keep the material on the correct plane.

The Skilsaw SPT99-12 Heavy-Duty Worm Drive Table Saw is quite a bit heavier than its earlier counterpart and benefits from a rolling stand. The wheels are a massive 16″ to help it roll easier and tackle stairs.

I took the table saw on an off-road field trip to just how well the large diameter wheels actually work and it’s pretty impressive compared to other models. It rolls as easily as advertised and handles concrete edges and stairs better than most. You still have to take your time, but the resistance to overcome as you move from one ledge to the next is noticeably better.

The downside of moving to a rolling stand is that you lose some stability. Some people will tell you that I’m unstable to begin with, but that’s another story. It’s not the fact that there are wheels involved – each of the four contact points with the ground stay put well. It’s the frame design that you can’t get around that inherently isn’t as rigid, but that’s something every rolling stand we use suffers from. It’s not a deal-breaker and you can still make accurate cuts in spite of it.

Most of your adjustments are standard. The bevel locks securely and swings freely when released. The angle indicator contrasts nicely against the scale to make reading it easy.

The height adjustment takes a lot of turning to fully raise or lower but is easy to operate. If you look underneath the saw, you’ll notice the gearing is all metal. Some table saws use plastic gears.

The dust port on the back is your standard 2-1/4″ diameter and there’s an elbow included. If you’re not connected to a dust extractor, you can direct the sawdust down into a bucket or onto the ground.

If you get a clog, all you have to do is loosen the thumbscrew on the back of the dust port to access the collection area. It’s a nice change from some of the other systems where you have to reach all the way below to release a clip.

The miter gauge isn’t going to impress most users. It’s a standard T-rail design with a plastic adjustment and no stops. While that’s not usual, my major complaint is that the raised markings are very difficult to read since there’s no contrast.

You can’t buy a table saw without a push stick, blade guard, riving knife, and anti-kickback pawls- at least not in the store, Craigslist is a different story. All of this stores securely on the frame. They’re still no easier to attach, but they’re not going anywhere on the ride over to the jobsite.

The telltale sign of a struggling table saw is the shudder you get as you push the material faster than it can cut. Sometimes, it’s on the user, but most of us push at a pretty constant rate from day to day. So when we come across a saw that has less power, we have to slow down to preserve a quality cut. That’s something we found on the SPT70 when we got to some of the tougher cuts. But what about the Skilsaw SPT99-12?

We cut 3/4″ plywood, 2x, and 4x material with the Skilsaw SPT99-12 in our testing expecting to find power closer to the upper-tier. Since the 70-series model is already well-established in the mid-range, the more powerful motor should produce faster, smoother cuts. And that’s exactly what we found.

Cutting through plywood is a breeze with some of the smoothest cuts we’ve enjoyed on a table saw. It rips through 2x material pretty confidently as well. You can definitely get some shudder when ripping 4x material, but if you slow it down a little, I think you’ll be impressed with the saw’s ability to give you a quality cut.

Getting an accurate cut with any table saw is a function of proper setup. Most saws, the Skilsaw SPT99-12 included, come factory calibrated and need little, if any, adjustment out of the box. But you still need to check it. All of the details you need to adjust the saw properly are in the manual. Once you ensure squareness all around, you should get as accurate a cut on this model as just about any other jobsite table saw available.

Sooner or later you have to change the blade and there’s not a ton here that’s different from your standard table saw. What does stand out it that the blade lock holds itself in position so you can move your hand out of the way when loosening or tightening the blade.

Skilsaw’s new SPT99-12 draws worm drives into the conversation with power that rivals some of the best jobsite table saws available. The power makes incredibly smooth cuts in sheet goods and gives it the ability to rip 4x material. With rip capacity up to 30-1/2″, an accurate rack and pinion system, a quality set of features, and one of the better rolling stands available, it has to be one of the best table saws currently on the market. 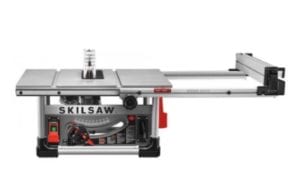 Buy at Acme Tools
Buy on Amazon
Want more? Join our newsletter and get the latest tool reviews every week!

I ordered one of these from Acme Tools (great service!) based on the reviews. I was really hoping this would be an upgrade from my Makita 2703 that has seen lots of use. Unfortunately the strap that was supposed to hold the motor in place during shipping was broken (no visible damage to box from the outside) and the plastic guard that directs sawdust to the outlet was broken. I started checking alignment, but the first thing I noticed was that the insert plate was twisted and did not lie flat to the table. It also rose from the edge… Read more »

.I am a Professional Remodeler -Thank you for the article. It was very helpful. Replacing a Dewalt rack and pinion fenced saw. The Dewalt was under-powered and I it had a plastic body/housing on it that got destroyed. so that it wouldn’t fit on the stand any longer, so it was unsafe to use and to get a new body/housing was over $100. The only thing I liked about the saw was the fence. Read some reviews and decided on this saw. I have taken it out of the box and put it together stand and all. It is HEAVY.… Read more »

Does this model allow for the use of a dado stack

Welcome, can I ask you some of the machines and equipment available to you and what are the prices? Thank you

Wow! Purchased this SkilSaw 1099 and so glad I did. Powerful worm drive has very impressive torque compared to other saws I’ve used in the past. Just finished a remodel and I’m impressed with this new saw.

How to Use a Keyless Drill Chuck | You Might Be Doing it Wrong!

October 23, 2022
MENU
Want more? Join our newsletter and get the latest tool reviews every week!

And...we'll even send you our "Best Tools for Your Hard-earned Dollars" white paper!
wpDiscuz
10
0
Would love your thoughts, please comment.x