Daytona is synonymous with speed—and Spring Break, but we’ll stay in context. Any gearhead drools at the opportunity to walk the infield, through the garage and pit area, and see the 31 degree banking of the turns from the inside of Daytona International Speedway.  So, when Sonic Tools USA called to ask if PTR would like to be their guests at the 24 Hours of Daytona race, we quickly accepted the offer. Turning down their request would not only have been irresponsible, it’d be downright irreverent.

Sonic Tools USA is not just an upstart tool company, and they’re certainly not green to the industry. The parent company, Sonic Tools, has been a pro in this game for many years. Sonic is a Dutch company, with facilities in the Netherlands, Germany and the United States. Sonic Tools USA is headquartered in Auburn, Alabama and is a subsidiary of Sonic Equipment, a market leader in the design and manufacture of premium hand tools and toolbox solutions. Sonic is firmly entrenched across Europe as the first choice of professionals and individual consumers.

What better way to launch a new company into the mechanic tool industry than to align yourself with racing. Sonic Tools has definitely immersed itself into the International Motor Sports Association (IMSA) and many of the teams that race in this series.  Not only do they sponsor four teams, they are also the Official Tool of IMSA.  Every race car must pass inspection for various reasons before each race, and the tools used during these inspections are provided by Sonic Tools. We got to see this up close and personal at the recent 2016 Rolex 24 race in Daytona. 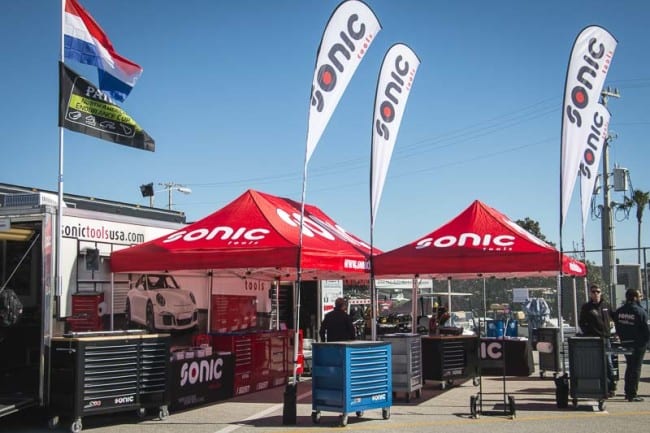 It is no secret that PTR is interested to learn more about the new Sonic Tools, and you will be able to read more about them in an upcoming review of their S10 tool box. Even more than our own evaluation, however, we really wanted to hear the opinions and thoughts of folks working on the 24 Hours of Daytona race teams. We sauntered down the garage alley to do some interviews (Did I mention we had infield passes with garage and pit lane access? Not that we’re rubbing it in…)

By the way, if you ever have the chance to rub elbows in the pits (the infield and garage area of the racetrack) with these race teams, make sure you visit on one of their testing days before the race.  They are much more relaxed, and you have a much better chance to get to chat with them. Right before qualifying or the race, these teams are down to business, so they don’t want to be bothered. We can all respect this.

Andrew Rubio is the engineer in charge of four (4) Ferraris while at Daytona. He also manages a Lamborghini team. Andrew is no stranger to the track either. His roots to racing go back three generations to the ‘60s. While at the track, each car has their respective tool boxes that the crews will use for working on the cars. Andrew has taken the time to even serialize the tools from each tool box with an air pencil. He also color codes the keys and locks so nothing is left to chance. This keeps crew members from grabbing a 10mm wrench from box 1 and putting it back in the tool box for car 3. Even if a mechanic does grab the wrong tool, by looking at the wrench, you can see the number engraved in the tool and put it back in the right tool box.  The organization of the tools in laser-cut foam with easily read labels is by far the most appealing differentiator that SONIC offers.

“The liner system is awesome and impressive—almost too good to be true” says Andrew. The tool boxes are in and out of the race trailers all the time. “The liner system allows us to be more compact, and we’re not searching all the time for a tool.”  With the Sonic Filled S12 Toolbox SFS, they were able to replace much larger Snap-On boxes, saving room in the trailer and mobilizing their gear more efficiently. Andrew said that, in a pinch, they can run two cars out of a single S12 box. “You almost get double the tool density, so there’s a ton of tools in the provided spaces.”

Another of the Ferrari race teams at the 24 Hours of Daytona race was Scuderia Corsa. In case you’re wondering, scuderia corsa translated is “racing stable”. Here we talked with Roberto Amorose in the garage area, or stable, where his team’s two Sonic Tools sponsored Ferraris sat waiting for the race to begin.  The Ferraris went to the 488s this year, with one racing in the GTD (Daytona) class and the other in GTLM (Le Mans). Roberto is the technical director, and he’s been doing this for about 15 years.  He oversees the engineers and works with technicians to answer any questions of a technical nature. With an espresso in hand, Roberto explained that it’s typical to stay up for 36 hours straight for a race like the 24 hours of Daytona.

Getting Roberto’s take on Sonic Tools sounded very similar to what we’d heard elsewhere.  There seemed to be a running theme. “The Sonic boxes are very well organized, and that’s a very unique feature. In racing, it’s always a mess, and you’re always in a rush. People tend to not put tools back in the right spot.” Roberto said this even as his technicians were swarming the cars, preparing for the race.

He continued to talk about the Sonic Tools system, “There’s only one place to look for a tool, and it’s easy to see if you lose a particular tool due to the open space in the foam.”  He also said that “the tools are thinner and slimmer, so they’re easier to manipulate [while not losing their structural integrity].” He said the most common tools you use all the time are 10, 13, and 15mm wrenches and sockets, so it’s not uncommon that some of these are lost. Roberto said that with a quick call or email to Sonic, he has the replacement tools sent out the very next day.

Meet Andris Laivins.  He is the Manager for CJ Wilson Racing, fielding a Porsche Cayman GT4.  Andris said “historically, we’ve used a mix of tools and boxes from Snap-On, Matco, Husky, etc.  Ordering tools from these companies was very cumbersome. You were either waiting on the truck to arrive on its weekly schedule, or you were making a trip to the retail store.”  Many times they were waiting 2 to 3 weeks on tool replacements with the other brands. “That’s not the case with Sonic. One call or email, and the tool is there the next day…and it seems that everything is in stock.”

According to Andris, “the number one reason for switching to Sonic Tools is the organization and consistency. Being on the road 15 weekends a year, it is critical that everything is right where it should be.”  They have a couple larger Sonic boxes at the shop, and they have smaller S10 boxes that stay on the haulers, going from race to race. Regardless of which box they’re working out of, “the techs are used to where things are” said Andris.

Travis Houge is the crew chief for Wayne Taylor Racing, and they run a Corvette DP prototype that finished 2nd at 24 Hours of Daytona this year. Our conversation was just getting started and Travis was already reiterating what the others said: “Organization is the key differentiator between Sonic Tools and all the others.” Even when it comes to buying new boxes and tools, “you don’t have to think about which tools to order or how to lay out the drawer.” WTR has tool boxes in the garage, tool boxes in pit lane, and they have tool boxes at the shop. Travis told us that “it’s critical that we have cohesiveness between our many toolboxes, so technicians don’t spend [precious] time searching for tools. Sonic provides this out of the box.”

According to Travis, tool ordering is also simplified with Sonic. With other brands you would typically wait for your box truck to come around once a week (or once a month depending on where you work), but with Sonic, you can order online anytime and have the tools the next day.  “It seems they have everything in stock, and I have yet to wait on a tool. Sonic makes it very easy with tool replacement (warranty) as well: You just take a picture of the tool, email it to them, and the new tool is here the next day.”

Writing this article, it’s like deja vu all over again. It is the organization of the Sonic Tools that have these racing teams raving. Sure, the quality of the tools are at or above the competition, but the true differentiator goes back to the excellent layout and organization. 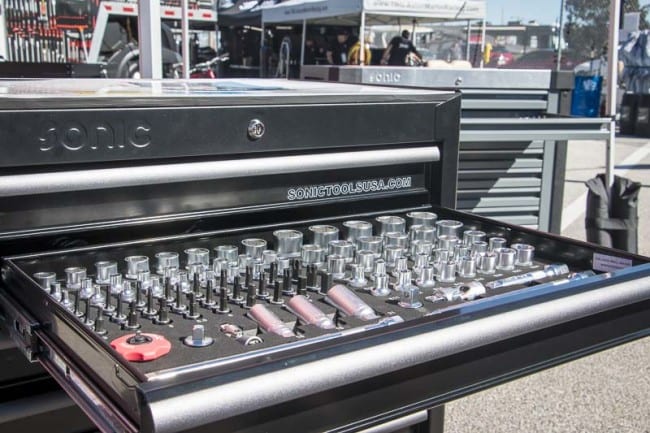 While visiting the Sonic Tools tent at the race, we were able to chat with Justin and Colby regarding their tools, boxes, and options.  They said that the key marketing message and strategy is the organization of the tools and the simplicity you have for ordering and warranty support. Whenever you can get your marketing message to be realized by those that actually use your product, you’ve accomplished your goal. Take a peek at the Sonic Tools USA website to see exactly what we’re talking about, or stop by their tent if you can make it to one of the IMSA races.

Having a love of automobiles that stems from his father's racing days, Tim has spent a lifetime around cars and trucks. From restoring and renovating them as well as fixing them when they break, Tim always has a tool handy. He currently resides in central Florida with his wife and 5 kids where he divides his time as mentor, devoted father, loving husband and jungle gym.

At one time we thought no one would need an instructional article on how to use a tape measure. They […]

A question we hear a lot is: Do I need to use insulated hand tools for electrical work? If you […]