Bollinger Motors B1: The Future of Work Trucks

The magic of electricity stored in a battery is nothing new. But the vision of how far we can take battery power is far from over. Ford has already announced a hybrid version of the F-150 for 2020. Germany is shooting to kill all combustion engine vehicles by 2030 with France and England a decade behind in 2040. But the Bollinger Motors B1 doesn’t look anything like what expect the trucks of the future to be.

It’s true that Tesla makes a much sexier electric car than nearly anyone else. But utility?

That’s a different story. But that’s what makes the Bollinger Motors B1 such an attractive option – it looks like it rugged enough to actually go to work on a jobsite.

“We are so thrilled to be able to finally take the wraps off of our Bollinger B1 SUT. This is the culmination of what has been a 40-year-long boyhood dream of mine and I couldn’t be more pleased with the vehicle and the incredible team who worked so hard to create it.”

With a look similar to the old Ford Bronco or a Range Rover, there are two rows of seating available and storage in the back. A set of cross bars will give you storage on top of the vehicle. There’s even storage in the front under the hood where you normally find an engine. And if you’re still short on space, you can remove the second-row seats.

Since the battery and motors are underneath the floors, you can have material pass completely from front to back with both ends open.

“Because the entire drivetrain and battery storage system is located between the chassis rails, the B1 has abundant and unique storage areas and a very low center of gravity providing for unsurpassed stability. The hydraulically-assisted steering rack was designed in-house allowing us the ability to fine tune the driving dynamics to our exact specifications.”

One of the unique features is the ability to convert from an SUV to a short bed pick up. You can conceivably leave the back open like a Jeep if you’d like to as well.

When you talk about a cordless jobsite, we normally think of tools that use a battery for power. On more power-hungry tools, there’s usually a tradeoff in performance. But what if you could plug your corded table saw into the Bollinger Motors B1 as a power source? Yep, it does that, too.

The battery compartment is sealed off to withstand the industry standard of 3.3 feet submerged for 30 minutes. This is likely more important for the B1 than it is any other current electric vehicle.

You can build a rugged-looking vehicle, but that doesn’t mean it has the power to do much. That’s not the case with the Bollinger Motors B1. With 360 horsepower and 472 ft-lbs of torque, it will go from 0 – 60 MPH in 4.5 seconds and reach a top speed of 127 MPH.

Between the power and battery capacity, you can expect to get roughly 120 – 200 miles range on one charge, depending on the battery package you choose. You’ll be able to charge the battery with either a 110V or 220V power source, or CHAdeMO protocol charging.

What will be interesting to see is if a full roof solar panel has enough power draw for extended applications where charging isn’t feasible. Given the 12-hour charge time with a 220V power source, that might be a bit too tall of an order.

The Bollinger Motors B1 Sport Utility Truck is a boxy truck that might be the most beautiful electric vehicle around for those who work tough jobsites for a living. On paper, it’s got the power, speed, range, and storage to be a legitimate option.

Final numbers aren’t available yet as far as price goes, but you can bet the $1,000 down payment is only a small percentage. While I won’t speculate on what that final cost will be, it looks like deliveries will start in roughly 19 months and expect supplies to be very limited.

Bollinger Motors B1 At a Glance

And...we'll even send you our "Best Tools for Your Hard-earned Dollars" white paper!
Your information will *never* be shared or sold to a 3rd party.

Upgrading the Stereo in a Ford F-150 XLT Work Truck

Pro Tool Reviews: A Pirate’s Life for Me

What, no push button start? Neat vehicle though, and I can see people buying them not only for work, but to be different like people who bought the H1, a civilian version of the military Humvee.

Actually, it looks more like the original Land Rover Series I produced in the late 1940s. 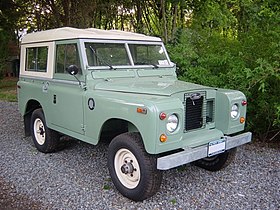 Thank you for sharing

Reminds me of the old IH Scout…

2 weeks ago 1
SUPPORT OUR ADVERTISERS

And...we'll even send you our "Best Tools for Your Hard-earned Dollars" white paper!
Your information will *never* be shared or sold to a 3rd party.
wpDiscuz
6
0
Would love your thoughts, please comment.x
()
x
| Reply