The Bostitch Cordless Framing Nailer is going to do its best work on untreated SPF framing as a punch list tool. It's weight and performance fall short of what Pros need as a primary framer.

Bostitch entered two models into our Framing Nailer Shootout back in July. One was their pneumatic F21PL2 that impressed us with an overall 5th place finish. This model, the BCF30PTM1 Bostich cordless framing nailer, does away with the hoses in favor of a 20V Max battery pack. But can this cordless edition hang with the solid performance of its air-powered counterpart?

The Bostitch BCF30PTM1 is best as a punch list tool on untreated SPF. As essentially a DeWalt clone, you might want to go to the other shade of yellow and open up its much larger group of cordless tools.

In theory, hoseless-ness on a framing nailer seems a novel and convenient idea. After all, leaving the compressor and the hoses in the truck makes for way less of a hassle. Plus, with a battery at the base of the nailer, you can actually stand it up on a flat surface. 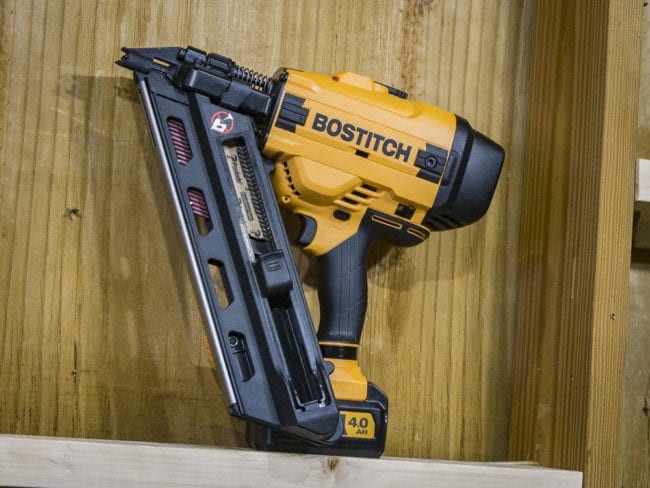 The Bostitch cordless framing nailer takes its power from what looks like a rebranded DeWalt 20V battery. In fact, it pretty much looks like a DeWalt clone all the way around. With both companies existing under the Stanley Black & Decker umbrella, it’s a likely hypothesis. Note, however, that batteries between the two brands are not interchangeable, so take that last bit of information with a big editorializing grain of salt. At any rate, Bostitch claims that users can fire off 1,200 nails on a single battery. 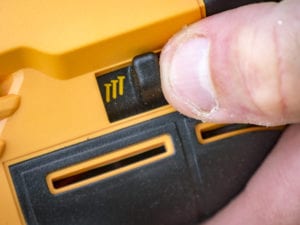 Never take tool-free adjustments for granted. You’d think that, in this day and age, no one would have to swap trigger to change firing modes, but that’s not the case. Bostitch, thankfully, isn’t one of those manufacturers. Mode changes on the Bostitch cordless framing nailer are quick, tool-free, and convenient.

There are also two power levels to work with. The low power helps preserve the battery, but we pretty much leave it in high power.

The depth adjustment on the Bostitch cordless framing nailer feels smooth and easy, and we can make our adjustments using just a thumb. 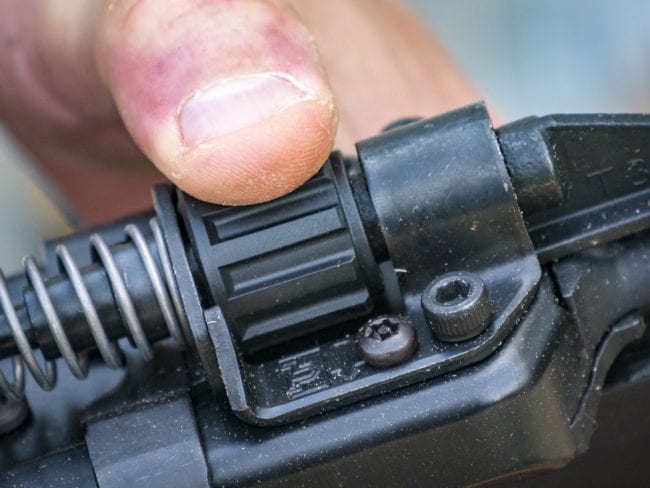 We appreciate not firing blanks for an indeterminate amount of time, and dry fire lockout keeps us from that. The BCF30PTM1 includes this helpful feature. 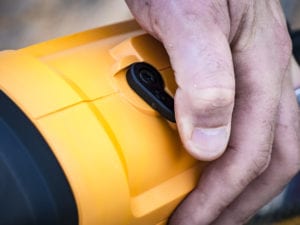 Jams are a pretty regular occurrence with nailers once you get out of the honeymoon stage, so having an easy way to clear the jam is helpful. The Bostitch cordless framing nailer comes with a jam reset lever on the top of the housing to expedite the process of clearing jammed nails. 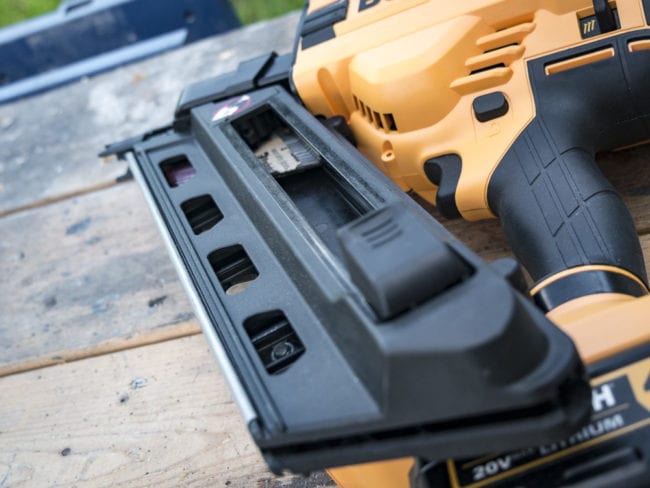 Weight plays such an important part of our ergonomics score. On longer jobs, the less fatigue, the better. Unfortunately, at 9.43 lbs, the Bostitch cordless framing nailer weighs over 2 full pounds more than the lightest model we tested. Over the course of the day, that weight adds up. 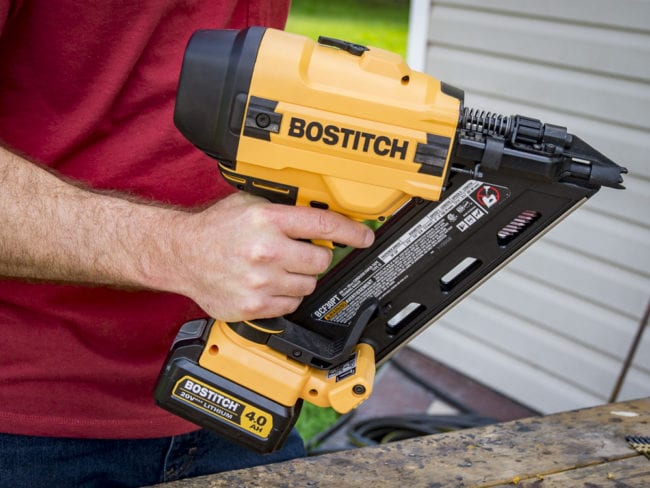 That said, the grip and handle design on this nailer feel good, and it’s pretty well-balanced. It isn’t particularly thick or bulky either.

Overall, this category is a mixed bag. Like the other battery-powered nailers in our test, the ergonomics are pretty solid apart from the weight.

Again, we’re looking at a bit of a mixed bag with the Bostitch cordless framing nailer. To find out how the tool performed, we used it to fire a whole lot of 3″ and 3-1/4″ nails. Here’s what we learned about the BCF30PTM1.

That pneumatic power generally fires off with more power, speed, and consistency that cordless seems like a pretty safe broad statement to make. In the case of the Bostitch BCF30PTM1, it holds true. With the nailer set for maximum drive, we bump fired off a round of 10 nails roughly 1/2-second apart into glued up stacks of OSB. No, it’s not LVL, but it does give us a tougher medium to see the difference in firing strength between each model. Unfortunately, we wound up with 10 nails between 1 and 3 mm proud. 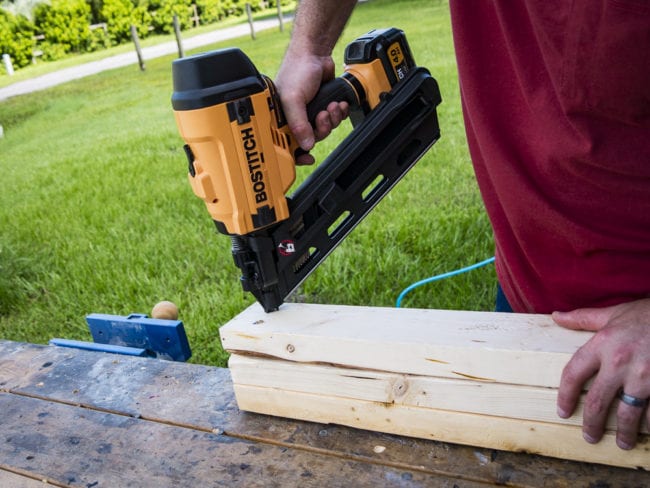 Even if you can overlook the relatively weak firing strength, one of the more frustrating aspects of the Bostitch cordless framing nailer revolves around the firing delay. Like its DeWalt cousin, there’s about a half-second delay while the flywheel winds up.

The Bostitch cordless framing nailer does have a little bit of kick to it, but it’s really not too bad. Paslode rules the roost in this department, though it’s nowhere near a deal-breaker for Bostitch.

The Bostitch BCF30PTM1 gets the toenailing right. The small firing head fits well into awkward angles and the side-spikes bite down into the wood really well. When you get past the firing delay, the finished product is nice. 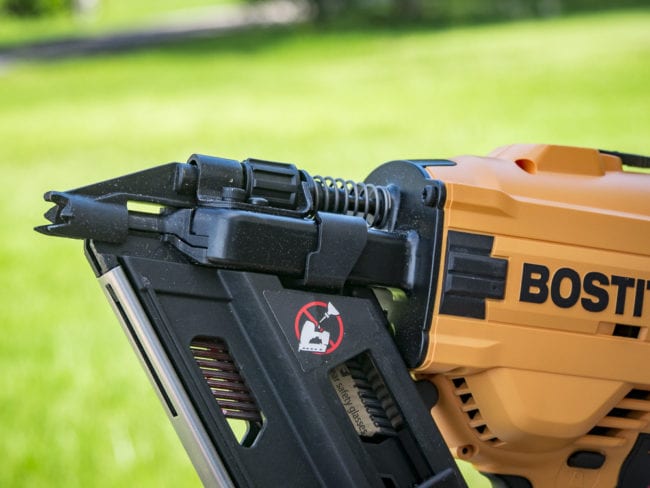 The head on the Bostitch cordless framing nailer allows for a decent view over what you’re doing. While the accuracy is a hair off from perfect, we also realize that a super dialed-in, pinpoint-accurate shot probably doesn’t sit too high on your framing nailer requirements. That’s what a positive placement nailer is for. 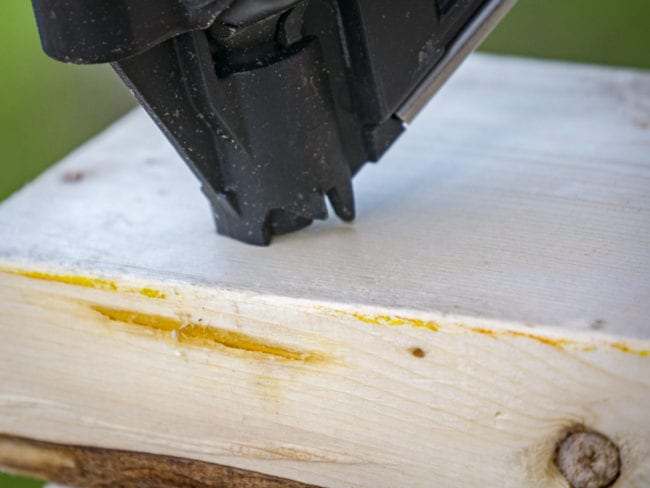 The Bostitch cordless framing nailer, with battery and charger, retails for $399 and comes with a 3-year warranty. This price falls right into line with what we’re seeing from other manufacturer’s cordless nailer kits, although we wish everyone would come down on their prices some.

When you consider the ergonomics and performance, it’s hard to justify spending that much more than a pneumatic nailer, though it does have its benefits in some applications.

The Bostitch Cordless Framing Nailer is going to do its best work on untreated SPF framing as a punch list tool. It’s weight and performance fall short of what Pros need as a primary framer.

Buy Now at Acme Tools
Want more? Join our newsletter and get the latest tool reviews every week!

When he doesn't have his hands on tools himself, Chris is often the man behind the camera lens making the rest of the team look good. In his free time, you might find Chris with his nose jammed in a book, or tearing out his remaining hair while watching Liverpool FC. He enjoys his faith, family, friends, and the Oxford comma.

Give Your Hands A Break With The Greenworks 24V Cordless Crown Stapler Manual staplers are fine, but why overwork your […]

Best Work Boots 2022 | Most Comfortable Boots for Men and Women