Professionals that are already invested in the DeWalt 20V Max lineup will love the $109 price to add the DCS391 to their arsenal. At $227.99 for the saw, one 4.0 amp hour battery, and charger, you may end up considering other options. Regardless, the performance of this model is good. Users should expect smooth, accurate cuts, but should consider having an extra battery charged up.

We got our hands on the DeWalt DCS391 20V Max Circular Saw to see how it stacked up in the 6-1/2 inch cordless circular saw class. As one of the most popular brands in the country, it’s always exciting to open up the black and yellow package of a new DeWalt tool and this was no exception. While more details of the specs are below, the important statistics are that the DCS391 runs off the 20V Max battery packs, has a no load speed of 3700 RPM, and runs a 6-1/2 inch blade. While there are a few manufacturers out there running 7-1/4 inch blades, the 6-1/2 inch is still the standard, making it through 2x material with room to spare.

On paper, The DeWalt DCS391 Circular Saw stacks up right in the middle of the class. At the $99 – $149 price point, it’s dead on in terms of speed and is priced reasonably at $109 for the bare tool. Of course, torque is also a factor to compare with speed, but we’ll take a look at real world performance in a moment. One thing that I did notice is that this circular saw is a little bit heavier than other in the class. It weighs about a pound more than the saws it competes with and is something you may want to consider if you’ll be using it all day. 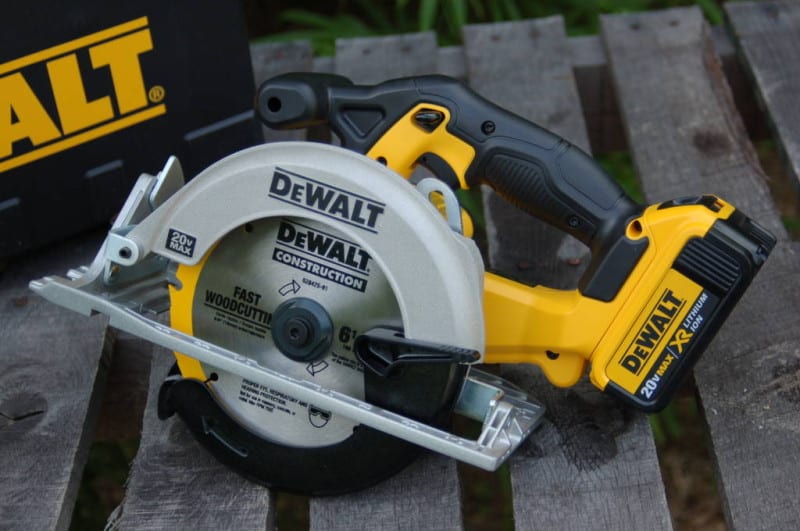 DeWalt has plenty to say about the features of the DCS391. They tell us that the magnesium shoe offers both durability and light weight. Comfort is improved with a rubber overmolded grip. The stock blade is a 6-1/2″ carbide tipped blade that will still cut through 2x material at both 90 and 45 degrees. Bevel angles between 0 and 50 degrees allows for plenty of flexibility for angled cutting. The kit is packaged with Dewalt’s 20V Max 4.0 amp hour battery to get the most run time available.

I tested the DeWalt DCS391 by putting it through a series of cross cuts into 2 x 12 pressure treated wood. I was actually testing several different circular saw blades at the time by making a series of 5 cross cuts without bogging the saw down. For the 6-1/2″ blades, the DeWalt was our saw of choice. Following the speed test, I also slowed down the cut to see how stable, clean, and smooth the cut could be.

In the speed test, I made 5 cross cuts in an average of 23.37 seconds using the stock blade that were surprisingly accurate. I realize that a number without something to compare it to doesn’t do you a whole lot of good, but the other saw I was using was Makita’s 18V X2 LXT (36V) system that is in a different class of saw. I expected to have a little bend or diagonal to the cuts by doing them in quick succession. Instead, I was treated to five very straight and accurate cuts.

When I slowed the speed of the cut (not the blade) down, I again came away pleasantly surprised. Each cut was very clean considering that I was using the 16 tooth stock framing blade. The cut was accurate, but this time I was not surprised following the results of the speed test. The cutting process was also very smooth. Because of the way I had to set up and stabilize my rig, I wasn’t standing in the position that I really would have preferred to be. For the sake of objective results though, I needed the rig to be incredibly stable. Despite a slightly awkward standing postion, the DeWalt DCS391 was still easy to hold and push through the cut. Nice job, DeWalt!

The Good and The Could Be Better

Let’s get this straight right out of the gate: I don’t think you’re going to be disappointed by the DeWalt DCS391 20V Max Circular Saw. There are a couple of things that could be improved as DeWalt moves forward in its 20V Max lineup though. First of all, there’s the weight. At about a pound heavier than the competition, users that want to make overhead or vertical cuts will notice the difference. Also, for those that carry it around from point to point on a jobsite would appreciate less weight. The other issue is run time. Compared to other single battery systems like the Milwaukee M18 and Makita 18V LXT, I just don’t seem to get quite as much out of the DeWalt 4.0 amp hour battery pack.

There’s plenty of good points to make about the DeWalt DCS391 though! First, when speed isn’t critical, you can count on being able to make cuts that are smooth, straight, and accurate even without a fence to guide you. The saw feels very stable through each cut. The 16 tooth stock framing blade is definitely adequate for most user’s needs. This circular saw comes with a hard plastic case that is well designed to hold the saw, charger, and extra battery easily.

If speed is your main concern, you need to look at a higher price point and consider something like the Milwaukee M18 Fuel or Makita x2 36V saws, which are both 7-1/4″. The DeWalt DCS391 isn’t going to wow you with speed. However, you’re going to enjoy smooth and accurate cutting. For $109, it’s an excellent value with only the Ridgid X4 being lower priced in this class (bare tool only). If you’re already invested in DeWalt 20V Max batteries, taking the DCS391 over other competitors is a no brainer. However, you’re going to have to fork out $227.99  if you need to include a 4.0 amp hour battery and charger and get the kit.

DeWalt put together a package that is appropriate for the professional user, assuming that you have at least 1 spare battery to get you through the work day. The price is low enough for many homeowners to consider having a professional level cordless circular saw in their arsenal as well.

Ever since Flex shook up Lowe’s with its line of power tools, we’ve had the opportunity to review many of […]

DeWalt’s Cordless 12-Inch Miter Saw Requires Only One FlexVolt Battery Way back in 2016, we got our hands on DeWalt’s […]

Good one and really a powerful one. I read about it for my own website. The main drawback is the weight which you mention. Comparing with other brand tools this one is heavier. But still a good one to go according to my knowledge.

Use mine almost every day