Two oil impact drivers have hit the market recently. The temptation to put them head to head may be overwhelming, but these are two very different tools. What they have in common is a hydraulic impacting mechanism very similar to a traditional impact driver. The difference is the oil creates a noticeably softer impact, reducing noise and abuse to your hands.

Industrial workers have been reaping the benefits of hydraulic impact technology for a long time. Massive bolts were once fastened by a two-man team carrying a hydraulic impact tool weighing well over 100 pounds. That was reduced to a size that is now easily handled by one worker. The technology finally trickled into the realm of impact drivers and threatens to replace them in time.

So what does that technology look like for those of us that finally have reasonably priced options from Makita and Ridgid? 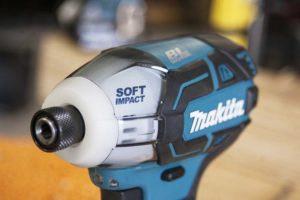 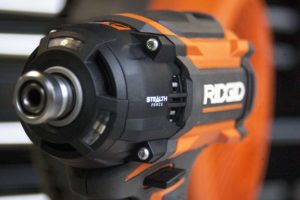 When you look at the way these tools are being advertised, it gives you an idea of what the product managers were hoping to accomplish. Ridgid boasts up to 50% reduced noise and 50% faster driving speeds. Makita, on the other hand, is claiming up 30% reduced noise.

Taking a look at the specifications clears things up a little bit, at least for Makita. At just 355 inch-pounds of torque, the Makita XST01 doesn’t have the power to go after lag screws and other high-stress applications. The physical design remains true to Makita’s trend of compact, ergonomically outstanding tools, even bringing the weight down a little more from the XDT09.

Ridgid doesn’t list the torque of the Stealth Force. However, the no-load speed and impact rate are both below standard impact drivers. Somehow Ridgid still claims higher performance – but in what applications? Physically, the Stealth Force is bulky and heavy compared to the Ridgid brushless impact driver.

Real-world performance is where the rubber meets the road and these tools depart in completely different directions.

Makita only claimed noise reduction over its traditional impact driver and they nailed it. It all three speeds, we recorded decibel ratings 40% lower than the Makita XDT09 we put it up against. This is put up against slightly slower screw driving speeds. Testing lag screws really would have been outside the design intent for this model. With Quick-Shift Mode dropping the speed down to Slow, it became obvious that Makita also developed an impact tool capable of very precise work when you want to protect work surfaces.

Ridgid claimed up to 50% reduced noise and also outperformed the claims in our testing. Compared to the Ridgid Gen5X Impact Driver (brushed), the noise level dropped by 75%. Looking at recent results from our best impact driver article, the Stealth Force bested the last in the field by 41% in the screw driving test and 61% driving medium size lag screws. Other models were considerably closer than that. However, the Stealth Force came in 1st in both tests, and 2nd with large lag screws by 0.1 second. Being this powerful also meant that we had to sacrifice some precision for the sake of speed, though driving in lower speeds certainly helps.

The Makita oil-impulse driver is a screw driving specialist that drops the noise level down significantly. It has both outstanding ergonomics and a softer impact you can feel while driving. It’s not meant to replace your 18V impact driver – it’s your go-to screwdriver when you need to keep the noise down around offices, apartments, and schools. Get your hands on the Makita XST01 if you need to drive screws with less noise and an element of precision.

Ridgid’s Stealth Force is a true impact driver replacement with top-class power but sacrificing extra weight to make it happen. While the impacts are softer than the hard-hit of an impact driver, they’re also stronger. You’ll notice how much more the mechanism pushes the tool under load – that translates into the faster driving speeds we experienced. Despite this, it’s not nearly as tough on your hands and arms as a hard-hitting impact driver. Pick up the Ridgid Stealth Force if you’re looking for the fastest performance in an impact driver that also happens to reduce noise in all applications.

Shop Ridgid at Home Depot
Want more? Join our newsletter and get the latest tool reviews every week!

HART’s 4V Screwdriver Helps With Household Driving Tasks Driving screws with a manual screwdriver can get old fast. This goes […]

My stepfather just turned 61. Back before I knew much of tools (maybe 2008ish?), he and I came across a ridiculous open-box sale on some 24V B&D drills, which are what we each used until I started restoring vintage corded drills last year. Anyway, I figured his aging back and trick shoulder could use something with more rotational force and less weight than our orange behemoths. While Ridgid is my go-to for wet/dry vacs, I generally shy away from the brand, but the Stealth Force was one of the final two models I was considering for him after over two… Read more »

This is a great review. I bought the Stealth force by Rigid. It absolutely has changed the rules of the game. Just this morning I was screwing down a subfloor with a co-worker. I used the Rigid, he had a Dewalt 20v. It’s amazing how loud the Dewalt is in comparison. The Rigid is stout and just gives top notch torque with little noise. Everyone on the job site is very impressed. Great buy, well worth it if you remodel and noise can be an issue.

And...we'll even send you our "Best Tools for Your Hard-earned Dollars" white paper!
wpDiscuz
8
0
Would love your thoughts, please comment.x