The new RevMark white ink industrial marker picks up where the original RevMark pens leave off. Dark colors are great, but sometimes I need to write on dark material like cast iron. That’s when I normally turn to a paint marker. Then I throw on some Santana and do my best rumba to shake the thing up. If I’m lucky, David C. Smith and his Safety Third team didn’t leave the cap off and let it dry up.

The RevMark white ink marker is what is says – white ink instead of paint. The question is how well it’s going to write on the materials that you normally use a paint marker for.

The big feature of the RevMark white ink pen and it’s brethren is all about the outer design. The clip is the inverse of what you normally find on a pen, allowing you to clip it to a belt or pocket tip down. That means you should be able to start writing immediately. 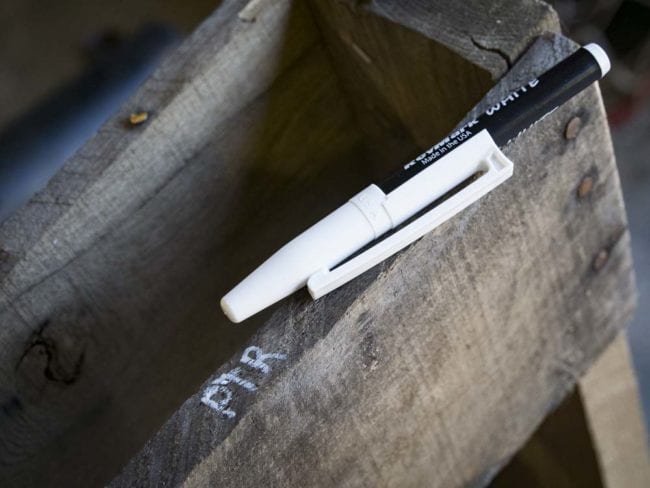 With a push of the finger on the cap while you pull up the marker, you can easily pull the marker out. At least that’s what PenCo says about their RevMark.

So does it work?

Yes and sort of. On my belt, all I have to do is pull the marker up and the cap stays put. It works like a charm there. In my jeans or shirt pocket, the cap likes to come out with the pen. It can become a two-hand operation, especially in your shirt pocket. 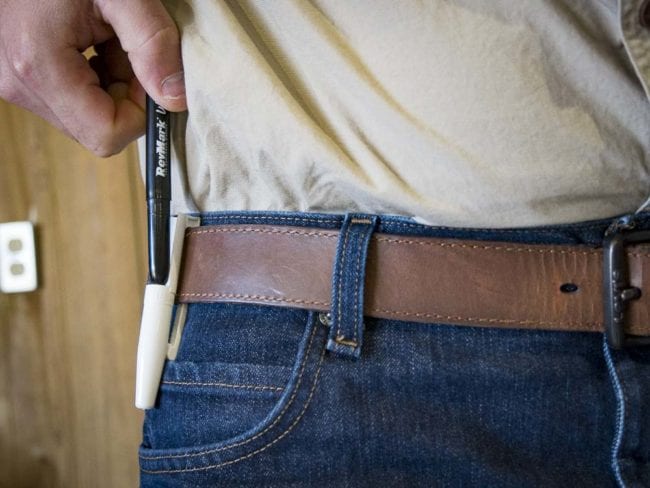 Personally, I like to keep my pen inside my pocket rather than outside on my belt. But if the marker works well, I’ll consider the switch.

Putting Pen to… Everything

The RevMark white ink marker came in just in time to mark some cut lines and put identifying marks on a few tools. Writing on metal is very effective. Wood is a little tougher on the tip, but it’ll make do better than a paint marker. Concrete is another material that you can write well on, though how often you’ll need white may be in question.

The big takeaway is that on glossy materials, you really need to wait a minute or two for the ink to dry. It comes out pretty think and you can wipe it off. On rougher materials, It’s tough to remove, but you can smudge it. 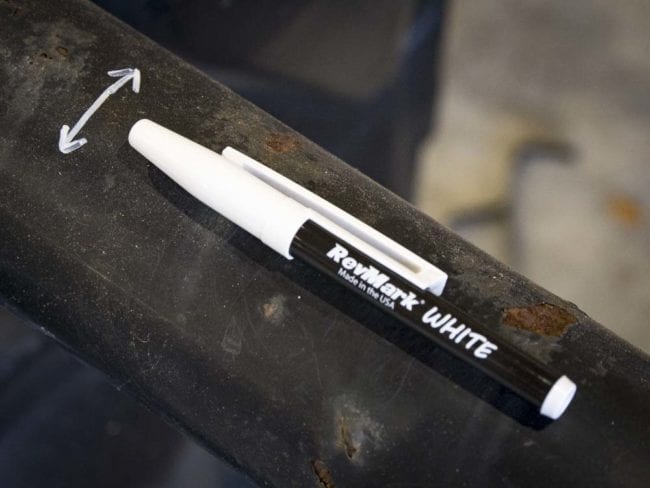 If you don’t mind wearing a pen on your belt instead of your pocket, the Made in the USA RevMark white ink pen is an effective replacement for your paint marker in most common applications.

At one time we thought no one would need an instructional article on how to use a tape measure. They […]

Tape measures are a staple in everyone’s toolbox from the most seasoned Pro to the greenest DIYer. Ranging in length […]

We love Irwin tools and their Vise-Grip locking pliers remain one of our favorite go-to tools. Of course, their Marples woodworking chisels are […]

ToughBuilt Levels Provide Durability, Accuracy, and Versatility On Your Next Project A few months ago, we got our hands on […]

For all the RevMarks I find that if I twist the marker as I pull it out the cap stays where I have it clipped almost every time. As always I appreciate the reviews. Keep up the great work.

Appreciate the review and glad it worked out well for you!