It wasn’t that long ago that we saw USB ports on tool batteries—Black and Decker did this back in 2016. Before that, there was the Milwaukee USB Power Source which came with their heated gear, Makita ADP05 power source, and the DeWalt DCB090 USB charger. Each of those was an adapter that turned any compatible tool battery pack into a USB charger. The EGO Nexus Escape Power Inverter takes it further by adding an AC outlet.

Attach the EGO Nexus Escape power inverter to any EGO battery and you get a 150W AC outlet. That’s enough to power up laptops, fans, lights, and more. Plus, you get two USB outlets for powering phones and tablets. It’s compatible with all EGO 56V batteries, and it retails for just $99. Do the math, and you can run a 42″ LCD TV for around 10 hours on their 5Ah battery. That same TV could theoretically run for 15 hours on the 7.5Ah battery pack.

At 150W this isn’t something you’d want to use with larger power tools. It does, however, provide a compelling alternative to DC-based inverters that would connect to your truck or SUV. We recently went camping, and this type of system would have powered a laptop for a considerable amount of time before requiring a recharge. Given a modern 13″ laptop runs for around 10 hours, a single 5.0Ah EGO battery would operate it for as much as 40 hours or more (see chart below).

EGO gives a per-battery breakdown of the 150W inverter’s capabilities: 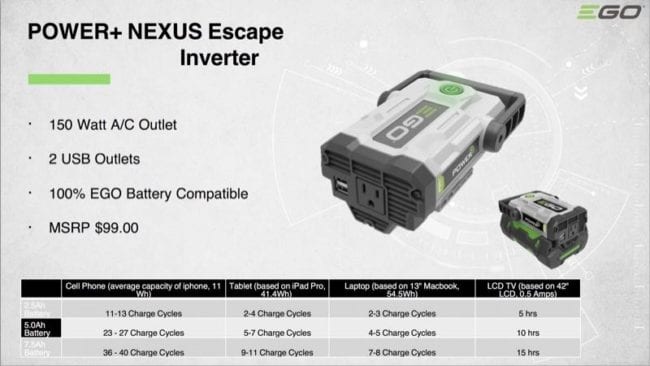 I think glamping is about to get even more popular.

The new EGO Nexus Escape Power Inverter can be purchased here for $99. Check back here soon for our full review.

Kick Old Man Winter In The Teeth With A HART Heated Blanket As I’m writing, the weather outside is fairly […]

EasyHeat Sno*Melter Makes Winter Safety A Priority Here in central Florida, we don’t have many winter weather woes, but many […]

what is the lcd tv wattage?.

Types of Miter Saws and Which is Right for You

Best Work Boots 2023 | Most Comfortable Boots for Men and Women