The story behind WD-40 is actually pretty fun and interesting. Back in 1953 a small San Diego company called Rocket Chemical Company attempted to develop a rust-prevention solvent and degreaser for the aerospace industry. They didn’t get it right away, and it took them 40 attempts to figure out a Water Displacement formula that actually worked the way they wanted. Of course, that formula hasn’t changed for over 58 years and Water Displacement Attempt #40 (WD-40) is still going strong. I guess when you finally hit it, you run with it.

Of course, the WD-40 Company isn’t stupid (although there is a good argument for them being extremely slow to market), and they have now released the new WD-40 Specialist line of best-in-class specialty products. These new products are designed specifically to give trade professionals the performance they need to get their specific jobs done right. They’re also great for home users and priced reasonably. The new WD-40 Specialist line consists of five products: Rust Release Penetrant Spray; Water Resistant Silicone Lubricant; Protective White Lithium Grease; Long Term Corrosion Inhibitor; and Rust Remover Soak (available in 1 gallon containers). The new Specialist line was developed at the WD-40 Company Research and Development Center and all of the new products are 50-state VOC compliant. According to WD-40, ASTM and other industry accepted test methods are showing that their products are at least as good, if not better in key performance areas than leading competitors.

We got to test out the new WD-40 Specialist Products and this is pretty much the blow by blow of each lubricating spray as we used it.

WD-40’s Rust Release Penetrant Spray uses capillary action, or the property whereby a liquid will flow along narrow spaces, seemingly against gravity. This capillary action lets the Penetrant Spray to work its way into tight crevices, threads and seams to break the bonds that hold stuck parts together. It also helps prevent rust and corrosion from re-forming and leaves behind a lubricating layer. The spray is a no-brainer product for those looking to deal with rusty nuts & bolts, seized threads, locks, chains and pretty much anything that’s rusted or stuck and won’t budge. Because it’s free of petroleum, it’s also safe to use on plastics, and rubber. WD-40 markets the key technology as Blu Torch, which is a proprietary blend of solvents, metal working fluids and surfactants that provide fast-acting penetration – up to 50 percent faster than the leading competitor, according to the company.

We were probably most excited about this product as it was a compound that promised to dry quickly and not leave a mess. In addition to lubricating hinges, cables, pulleys, guide rails, valves, linkages, and locks – it also promises to waterproof and protect moving parts. WD-40’s Water Resistant Silicone Lubricant is safe to use on metal and non-metal surfaces alike, including rubber, plastic, and vinyl. When it dries it leaves only a clear, non-staining film that isn’t sticky and doesn’t leave a messy residue. We applied it (amply) to several interior door hinges that were giving us problems – mostly due to age and, well, tremendous amounts of abuse and neglect. The effects were immediate, but what we liked best was the lack of any residue – which also means that it’s not a product that instantly turns the product you use it on into a dirt-magnet. This is a lubricant that is both effective and neat to use. 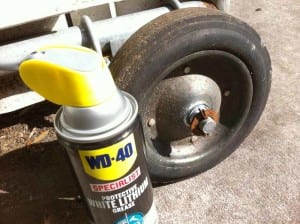 You use White Lithium Grease anywhere you want serious protection of metal-to-metal. White Lithium also has the added benefit of inhibiting rust and corrosion. Since WD-40 has configured their product as a spray, they were up against a particularly difficult task, yet they made it so that it covers evenly as a liquid and then dries into a thick, protective coating that won’t wash off, melt, freeze or run in any weather. Per WD-40, their Specialist White Lithium Grease is perfect for auto hinges, gears, sprockets, outdoor hinges, latches, overhead door tracks, pulleys, cables and guide rails. It’s also excellent for lubricating equipment before placing it in storage, and is 50-state VOC (Volatile Organic Compound) compliant. We applied it both wheels of an outdoor gate that is used year-round in all types of weather. Keeping these wheels lubricated and functional is of eminent importance. The spray went on easily, and we loved how easy it was to direct the concentration and direction with the Smart Straw. 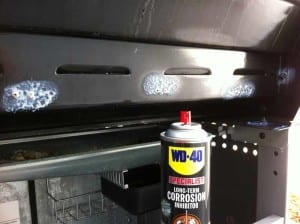 WD-40’s Long-Term Corrosion Inhibitor is designed to protect metal from corrosion (rust) for a whole year if used outdoors, and up to two years when applied indoors. How does it do it? Specifically, we don’t really understand the technology, but we do know that it has something to do with metal-seeking Vapor Corrosion Inhibitors (VCIs) which seal & protect metals from the air and moisture that can cause rust. That much makes a lot of sense, since everyone knows rust is caused by oxidation. Stop that, and you stop rust. VCIs are significant (and effective) in that they continue to work, even if some of the sprayed surface gets rubbed off, re-sealing the vulnerable surface. WD-40’s Long-Term Corrosion Inhibitor is ideal for use on tools, locks, propane tanks, hinges, chains, cables, metal doors, car parts and any other untreated metal that is exposed to the elements or damp conditions. The Tin Man should have used this stuff instead of the oil can.

We sprayed this stuff all over the back of our Stok Quattro Gas Grill, which we’ve found to be a bit of a rust-magnet around the rivets on the back of the grill. Immediately, the spray foamed up and made contact on and within the areas we sprayed. We’ll have to report back on how well it did, but the coating seemed sufficient and thorough. We also hit up the propane tank which is another great source for rusty connections over time.

We didn’t get to try out WD-40’s new Rust Remover Soak, but our first thought was: “Can we dip our SUV in it?” Probably not… Made with biodegradable ingredients and a non toxic formula, it is designed to “restore rusted metal parts back to bare metal.” That’s a pretty impressive claim. How’s it work? You leave parts immersed from 1-3 hours for light rust and overnight for heavy rust. It’s a great solution for smaller parts that can be submersed. For fixed products, you’ll want to use the Rust Release Penetrant Spray.

As our team is putting together our best lawn mower recommendations for the year, it’s with a hint of sadness […]

WD-40 Rust Release Penetrant Spray is not “free of petroleum.” The company’s own web site says that it contains “petroleum solvents.” As to what it does to rubber and plastics, I haven’t tested that. In general, though, petroleum products eat rubber almost instantly (though there are exceptions, like tires).